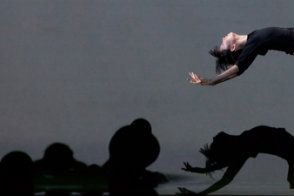 During the course of Jessica Lang Dance’s Wednesday night opening performance, my mind kept coming back to a theme, which is unusual as many dance performances don’t necessarily coalesce thematically for me. Sometimes the pieces don’t necessarily speak to each other. Sometimes they don’t speak to me. Sometimes there is nothing overarching visually, musically, or temporally which threads everything together and, sometimes, that is the point. In Jessica Lang Dance, there’s a lot going on and it can seem like the night is racing by very, very fast. For me, the concepts of time, interaction, and connection were everywhere in this performance, and I was quietly overtaken by my discovery as well as subtly enthralled.

The evening began with the New York premiere of “Lines Cubed,” inspired by the non-representational, geometrical and iconic paintings of modern Dutch artist Mondrian. Designed in collaboration with molo, a studio based in Vancouver, Canada, the set became a fluid recreation of Mondrian’s neoplastic grid compositions of heavy black lines forming rectangles upon a largely white backdrop. The primary colors in the dancers’ costumes as well as in the lighting completed the illusion of a Mondrian come to life. “Lines Cubed” is not merely a recreation, though. Broken up into five parts three of which were dedicated to each of the primary colors (red, yellow, blue) and set largely to electronic music, watching “Lines Cubed” felt at times like being inside the mind of a computer (or some other form of artificial intelligence) that decides it wants to be a choreographer and artist, and this is the end result. The dancers, at times, seemed liked cogs in a machine come to life, as though their gestures, shapes, and interactions were meant to be very synchronized, timed, and mechanized which, unfortunately, made moments when their mirroring gestures were slightly ill-timed or unmatched fairly noticeable. Nevertheless, those moments contributed to the poignancy of the piece:it is, after all, humans up there in dialogue with each other, and their A.I. creator cannot make them into automatons however much it wants to be kept company in that realm.

Indeed, the two compositions subsequent, the New York premiere of “Mendelssohn/Incomplete” and “Aria” were, stylistically, quite different than “Lines,” although, with continued commentary on what it means to be human, emotional, and in dialogue. These pieces, set to the music of Mendelssohn and Handel, respectively, were much more like traditional modern dance (if such a thing can be said) in that they were dancers set against a fairly spare backdrop in dialogue with t other using physical language heavily influenced by ballet and highly charged, climactic classical music. In contrast, the fourth piece of the night, “The Calling,” consists of a single dancer (female or male depending on the night) swathed in an oversized white gown that both limits movement and creates a striking visual emphasis on the dancer’s elegantly minimal gestures. Here, the lone dancer barely moves across the stage and is forced into dialogue with her own costume which creates a spectacular visual conversation as well as a surprising struggle.

Nevertheless, if “The Calling” is an instance of an isolated dancer struggling to express herself against physical constraints, “White” is an instance of dancers communicating with each other through tempo. Originally conceived as a composition that could not be performed live, “White” is a performance entirely on film. The camera is placed in a position that replicates the perspective of the audience, so it can seem very much like you are not necessarily separated from the dancers by the medium. However, the dancers’ images are subtly overlaid upon each other and reacting at different speeds. At any one time, each dancer could be performing at real time while the dancer next to them is in high speed or in slow motion. The effect is a clever commentary on time, space, and interaction as is the withholding of live dancers from the stage. Similarly, the final piece of the evening, “i.n.k.,” inspired by the videos of Japanese artist Shinichi Maruyama, captures the slow motion images of ink and water colliding and suspended where the dancers and their shadows replicate, mimic, and collaborate with those gestures. In conjunction with the original score by composer Jakub Ciupinski which incorporates actual samples of water sounds, this piece was so utterly poignant and moving that I was surprised how captivated I could be by images, sounds, movements, and moments so abstract, simple, and peaceful.

Jessica Lang Dance challenges you to find meaning while you are bombarded with vastly distinct pieces of varying media that fly by you in a disparate pace. To a great extent, however, I think that is the point. In an interview that Jessica Lang gave not too long ago, she quoted painter Henri Matisse saying, “ ‘If I told you the definition of what I painted, you’d only remember the definition and not see something for yourself.’  That’s how I feel about dance [….] some people really crave definition, and so they are intimidated by the experience.” If you are among those intimidated by dance, I encourage you to start with Jessica Lang and stay open to the experience.