Off Broadway, Play Revival
Runs through 4.20.14
The Gym at Judson, 243 Thompson Street 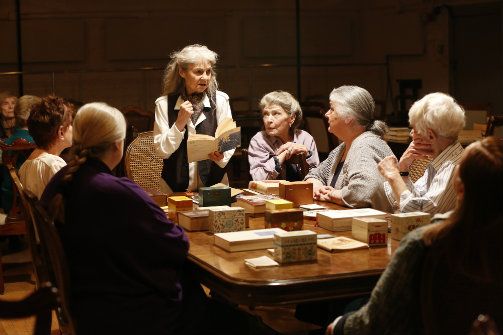 BOTTOM LINE: Once again, the Transport Group hits it out of the park with this quietly subversive revival of John Van Druten’s unassuming memory play about life in San Francisco in the 1910s.

Those who have seen I Remember Mama—either as a play (1944), film (1948) or television series (1949-1957) may well remember it much the same as one would remember childhood trips to grandmother’s house: warm, inviting, and the furthest thing from “edgy” or “risky.” Its many incarnations (save a musical flop in 1979) have always proved popular with audiences, but it's the kind of piece that might seem out of place in the Gym at Judson, a pivotal space in the history of experimental downtown theatre. Yet the Transport Group’s current revival manages the impossible—it is somehow both the comforting chestnut we expect, and also one of the most radical revivals I’ve seen in quite some time.

I Remember Mama would hardly seem the obvious choice for subversive theatre. It’s the story of Marta “Mama” Hanson and her family, as told in retrospect by her daughter Katrin. Based on Kathryn Forbes’ fictionalized memoir Mama’s Bank Account, the play is essentially a series of vignettes about the life of the Hanson family as they struggle to scrape by in San Francisco at the turn of the century. The family gathers to go through the weekly finances, each time hoping they don’t need to take out money from “the bank.” Mama’s sister wants to marry an undertaker and fears her other sisters will tease her. The Hanson’s boarder, a man with no clear profession, reads novels to them at night. Mama’s youngest, Dagmar, gets sick and must stay over at the hospital. When she comes home, her cat is dying. There’s nothing edgy here—just typical moments in a typical immigrant family at the turn of the century. So what makes this radical?

It’s the casting: rather than cast the various members of the Norwegian Hanson family according to type, director Jack Cummings III elected to have ten women “of a certain age” play all the roles. From little Dagmar to Mama’s only son Nels, to Papa, to Mama’s brother Uncle Chris, each character is played by a veteran actress. This could easily come off as a gimmick—a way to make a staid old play seem “fresh” and “exciting.” But it actually makes perfect sense—having ten “Mamas” dramatizes not only how Katrin places her mother at the center of her memories, but also how Mama’s influence, felt by all of the other characters, is a constant theme in the play. This casting also deftly illustrates the tricky thing about memory—it’s unstable and constantly changing, so the exaggerated influence of one person (like Mama) can color our memories of everything else.

Yet while this casting adds greater complexity to Van Druten’s play, it also serves as both a reminder about, and a corrective to, the problem facing older female actors. To a one, these women are super talented (all have Broadway credits), and would be a welcome addition to any cast. The trouble is, there aren't many roles for older women. So seeing ten such amazing women all on one stage is a rare treat, and reason alone to buy a ticket. This production of I Remember Mama is a master class in subtle, restrained acting. All ten women are wonderful, but I especially enjoyed Barbara Barrie’s energetic Katrin and Heather MacRae’s quietly steady Nels. Then there is Lynn Cohen, the shortest in the cast, who brilliantly manages to portray the intimidating, even over-bearing Uncle Chris. And as Mama, Barbara Andres is simultaneously powerful and vulnerable, both the stalwart rock providing strength for her family and a woman who knows that financial disaster could always be right around the corner.

The cast is far from the only noteworthy thing about this production. Dane Laffrey’s set is remarkable in its simplicity—ten dining sets (table and chairs) are spread throughout the Gym at Judson, with the audience sitting on the perimeter. On each table is a different collection of antique objects—handwritten letters on one, old novels on another, or else handkerchiefs, silverware, or old photos. R. Lee Kennedy’s lighting design is similarly low tech—even “no tech”—the only lighting instruments are what appear to be traditional “gym” lights, with old-fashioned bulbs, hung in a grid over the space. There are no “theatre” lighting instruments like fresnels, lekos, or PARs—it’s almost as if these women were performing the show in their own homes.

And Cummings’ direction is beautiful, and a perfect fit for a play about memory. As a scene ends, the actors don't leave the playing space—they just sit down at a nearby table. There are no sets to change, so the action can remain fluid, easily moving from house to street to hospital to café. The opening and closing moments of the play were both exquisite, and I won’t spoil them here. But I think my favorite scenes were when the whole family gathered together, whether for the weekly accounting session or the nightly reading of A Tale of Two Cities. In these moments, we in the audience are no longer onlookers watching another family struggle to survive, but instead become welcomed guests in the Hanson family home. It’s one of the loveliest experiences I’ve had in quite some time—and one I highly recommend.

(I Remember Mama plays at the Gym at Judson, 243 Thompson Street at West 4th Street, through April 20, 2014. Performances are Tuesdays through Thursdays at 7 PM; Fridays at 8 PM; Saturdays at 2 PM and 8 PM; and Sundays at 3 PM. Tickets are $49 for general admission and $65 for premium reserved seating. To purchase tickets and for more information, visit www.transportgroup.org or call 866.811.4111.)