By William Shakespeare; Directed by Thomas R. Gordon
Produced by The Onomatopoeia Theatre 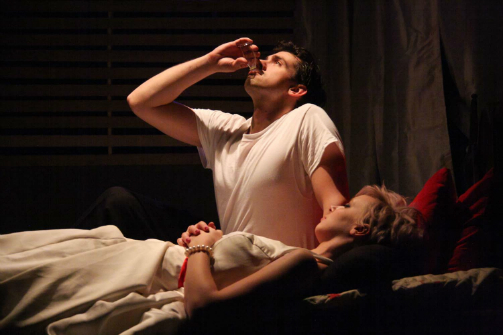 BOTTOM LINE: Fans of the Bard will be interested in the conceit surrounding this production of Romeo & Juliet, perhaps more than the performance itself.

When attending a play titled Inspecting Romeo & Juliet one might expect to enter the theatre anticipating an avant-garde interpretation, or a “convention” such as cross-gender casting or even something as radical as last season’s production of Julius Caesar at St. Ann’s Warehouse set in a women’s prison.

That wasn’t quite the case here, but director Thomas R. Gordon, artistic director of Onomatopoia Theatre, certainly got us off to an interesting start. While waiting in the lobby to enter the theatre, we were encouraged to vote on traits of the evening’s famous list of characters. The results were read to us during the typical “curtain speech” asking us to refrain from using our cell phones, etc. Our audience elected an aggressive Romeo, a rebellious Juliet, a lustful Mercutio, a harsh Father Capulet and a Paris in love with himself. This announcement segued nicely into the famous prologue of the play and we were, I presumed as the house lights faded, on our way to “inspecting” Romeo & Juliet.

What we actually witnessed during the evening was not so much an inspection as an array of provocative choices (many that worked and others that did not) including refreshing approaches to some otherwise less interesting players in the story, smart costuming decisions, evocative music and effective use of the limited lighting capabilities in the Gene Frankel. Lauriel Friedman’s Nurse and Justy Kosek’s Friar Lawrence stood out as particularly refreshing interpretations of their characters. This Nurse was a bookish maid with a nasal voice and glasses and a nerdy, little sister or librarian temperament; this Friar had a relationship with Romeo that read more like a coach with one of his ball players than an aged confidante.

There were other effective choices made by Matt Bloch and Kate Gunther in the title roles. Gunther’s Juliet was no coy innocent. She accepted Romeo’s flirtations as a challenge and Bloch’s Romeo was very effective, particularly in his aggressive, sensual monologue in the balcony scene. The famous balcony scene replaced romanticism with a series of the before-mentioned challenges, but it worked. Romeo did occasionally, and purposely, lapse into a more romantic syrupy dialogue delivery, yet Juliet kept interrupting him with line readings that clearly screamed “Stop talking! Act on this!” Perhaps an absurd comparison, still it was like Eliza Doolittle berating the gushy Freddy Eynsford-Hill begging for him to stop talking about love and to “Show Me!” This approach, along with Friedman’s side-splittingly funny interruptions, made for an odd, but very effective interpretation of this most famous of Shakespeare’s scenes.

A particularly nimble and effective physical performance was found in Sean Fitzharris as Mercutio. The energy he brought to the Queen Mab scene was particularly infectious. But here is where inconsistencies in the production’s concept -- and the before mentioned provocative choices -- undermined performances. The fight between Mercutio and Tybalt (who was played as a “niece” of Capulet by actress Paige Kresge) took on a James Bond feel with a suave man and well-dressed gorgeous vixen fighting with switchblades. The scene had smart fight choreography, but the gender-bending here turned one of the evening’s most fateful plot points into a sexy moment. Oddly, a few seconds later, Tybalt’s murder was staged more effectively and the casting choices worked.

The simple set is effective. A “loft” area above and behind the main playing space is used as Juliet’s chamber. There are interesting music choices throughout the play, and most of it works very well. One rare misuse is the jazzy, lounge bleats that accompany the marriage, giving it a less fatalistic premonition more appropriate to the story’s end.

The evening is a bit long and could benefit from some cuts, like the final Paris/Romeo dialogue that often finds its way on the cutting room floor.

Still, effective choices by a creative cast and equally effective directorial touches by Gordon keep the evening buoyant. Among the boldest is Juliet waking on Romeo’s last kiss. Surprising to the audience, but expertly played by Bloch and Gunther.

(Inspecting: Romeo & Juliet plays at the Gene Frankel Theater, 24 Bond Street, though December 6, 2014. Performances are Wednesdays through Saturdays at 8PM and Sundays at 1:30PM. Tickets are $20, and $10 for students. To purchase tickets visit brownpapertickets.com. For more show information visit  theotheatrecompany.com.)