Written by Gregg Barrios; Directed by Greg Hinojosa
Produced by Overtime Theater and The Woodlawn Productions
Part of the 2014 Frigid Festival 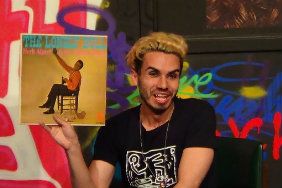 BOTTOM LINE: A vivid imagining of the life of Warren Peace, a Chicano DJ and GLBT pioneer.

Overtime Theater and The Woodlawn Productions bring the award-winning I-DJ all the way from San Antonio for its New York premiere in Horse Trade’s FRIGID Festival. I-DJ author Gregg Barrios described the show as “an homage to the era that dance music and the DJ culture emerged as the LGBT community was beset by the specter of AIDS.”

This is not my first encounter with Gregg Barrios's work, and I was glad to see the continuing authenticity of his voice. Telling the story of Warren Peace, Barrios's backgrounds in journalism and art house join forces and emit a creative script that operates somewhere between a one man show, a docu-love letter, and a magician's act with a hapless assistant. Peace's history is one of violence, death, disrespect, sickness, survival, and triumph. Discussing Peace's life, Barrios reveals a very specific cultural, historical moment.

I-DJ is a runaway streetcar of emotion, poetry, and history, helmed by the indomitable Rick Sanchez. The entire production hangs on Sanchez’s performance as Warren Peace, a character who carries 97% of the dialogue and 99% of the action. After all, it is Peace’s story, and with Sanchez in the role the audience becomes engrossed. The charismatic Hunter Wulff fills in as a sidekick, understudy, and sometimes scene partner; he plays a range of personalities and accents to supplement the storytelling. If there is a criticism to be found in Sanchez’s powerhouse role, it is merely that he has been given too much to do.

The dynamic language and extreme circumstances of Warren’s wild life surprise, move, and discomfit. I-DJ is a dynamic play told with imagination and vibrant language. It’s a wonderful piece to see if you are interested in immersing in a slice of Stonewall era GLBT history with a Chicano lens.

(I-DJ played at as part of the FRIGID Festival at Under St. Marks, 94 St. Marks Place through February 25, 2014. Tickets were $16. For more info about Frigid visit frigidnewyork.info.)