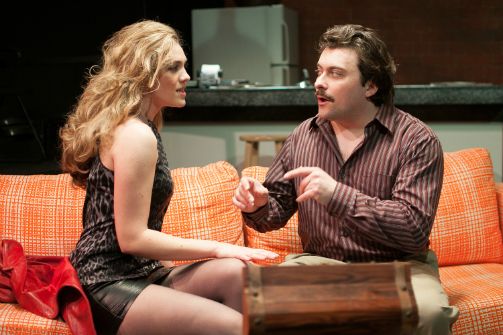 BOTTOM LINE: A good rendering of a great play.

Like many theatre-participating folk, there are a number of plays that I hold in reverence, for one reason or another, over others. Hurlyburly happens to be one of those plays, and so it makes my job as a neutral observer and reviewer rather difficult. For better or for worse, I approach every production with equal doses of excitement and dread. I know all too well the glory that can be gleaned from a fully realized production, as well as the frustration from a production that never takes flight. I am happy to report that Variations Theatre Group’s current production, for the most part, does not disappoint.

The production team has done a wonderful job of really making the most with very little, and I mean that in the best possible way. The set is minimal -- the main living space of the house in the Hollywood Hills shared by casting directors Eddie (Kirk Gostkowski) and Mickey (Deven Anderson) -- but the space is used to its absolute advantage creating a thrust stage where exits and entrances happen in three out of four corners, forcing the action to move deftly around the room in 360 degrees, giving audience members the opportunity to literally see all sides of the characters. The costumes, lighting, props and music are all period specific, and help create an absolute immersive experience into the narcissistic, neutron bomb-fearing, drug-hazed melee that was the mid-1980s. The almost constant consumption of weed, dope and booze is literally right in your face, to the point that you almost get a contact high.

Ultimately, however, this play lives or dies in the performances. Through this play, David Rabe has created seven of the most interesting, if highly flawed, characters in modern theatre. Each one has his or her own specific and highly stylized vocabulary and diction, and bringing these characters to life is no easy task. Gostkowski as Eddie, Anderson as Mickey, Brandon Scott Hughes as Phil, and Chris Harcum as Artie, do admirable jobs breathing life into their characters. Each actor finds balance between the vulnerability and the rage that motivates his character. The women in the play -- Rachel Cora as Donna, Christina Elise Perry as Darlene and Jacklyn Collier as Bonnie -- don't have as easy a time. Though they are well cast and are clearly fine actors, they don't find the same amount of fire or clarity with their characters, and consequently the energy of their scenes was inconsistent with the rest of the play.

It is my contention that the women (not the men) are at the center of this play. They are the ones who are present in their own lives, acting, not reacting, to their current circumstances. Unlike their male cohorts, they seem consistently able to access the central truth of the moment and articulate it in ways the men spend the entire play trying to do, but never really grasp. The women are presented as the ideals, but the men are so wrapped up in their substances and themselves that they are unable to see what is literally right in front of them.

As I have seen, read and thought about this play over the years, I have come to the conclusion that it is not about the chaos, or the hurlyburly, in which the characters find themselves, but rather it is about these characters desperately trying to impose a lost sense of order onto that chaos. Director Rich Ferraioli and his team have created that sense of chaos, and, in the final quiet moments of the play suggest that maybe the order they seek is within reach.