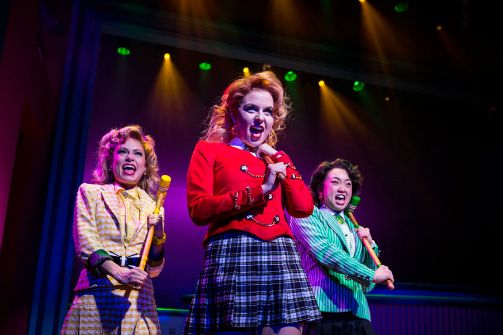 BOTTOM LINE: The pitch-black high school satire gets a musical comedy gloss that will please the die-hards as well as those less familiar with the story and its memorable lines.

Cult classic Heathers, largely ignored by audiences initially, just celebrated the 25th anniversary of its release and is getting a splashy stage upgrade with nearly two dozen songs. I was a teenager trapped in the Midwest and desperate for escape when I saw it, and the story of alienation and popularity in an oppressive Ohio high school really clicked with me. I was a little trepidatious but very curious as to how the anarchy and mayhem would work as a musical.

The new incarnation mainly succeeds by not messing with the spirit of the movie, and thanks to fun, well-paced tunes sung by a solid cast. They’re very energetic and attractive, arguably more slick and polished than the largely unknown actors in the low-budget original. One of my favourite songs is “Dead Girl Walking,” a rock number sung by Weed and McCartan, who display strong, passionate yearning voices. Comparisons are inevitable and while Weed is not as edgy or dark as Winona Ryder, she makes for a compelling protagonist. McCartan -- who distinguishes himself from Christian Slater’s portrayal with its shades of Jack Nicholson -- is charismatic even as he’s steadily unraveling, making Veronica’s push-pull relationship with J.D. believable. A song that was, not surprisingly, a crowd pleaser was “My Dead Gay Son,” done in a sort of rousing church revival style as the formerly homophobic fathers (Anthony Crivello and Daniel Cooney) of the two dead football players, Ram (Jon Eidson) and Kurt (Evan Todd), embrace the idea of their sons’ “secret.” In a new 21st century tweak, they also admit to their own latent feelings for one another. Another new addition is a Greek chorus of the dead teenage villains haunting Veronica, a device that effectively enhances her growing inner turmoil. A couple of songs such as “Candy Store” and “Shine a Light” come across as lyrically weaker and could either be cut or replaced by dialogue that gets the point across instead.

Although musicals can be tricky to pull off, especially when there’s beloved source material, for this long-time fan the stage version builds off a tight script and creates a new winning way to experience the bite and dark humour of Heathers. And if you’re lucky, maybe you’ll spot Christian Slater in the audience...as we did.