Off Broadway, Dance
Runs through 3.30.14
The Joyce Theater, 175 Eighth Avenue 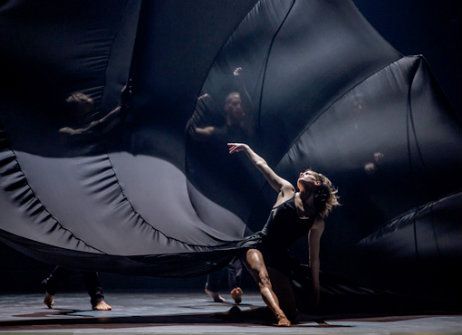 There is smoke, backlighting, a graphically printed floor, many costume changes, a parachute skirt that billows and fills the entire stage and lots of steps. The baroque music of Handel is seen in a new light since the steps are danced at speed demon pace for most of the show's 70 minutes. The brilliant music choices by Julien Tarride of commonly heard Handel piece's such as the "Hallelujah" are artfully threaded together with earthy, base rhythms.

The dancers moved exuberantly across the stage leaping, bending over, jumping and whacking legs and arms to and fro. They seemed to have been having the time of their lives. The work looks to be a joy to dance and somewhat a challenge with the speed.

These were some of the best trained technical dancers I have seen, yet at times the steps seemed to overtake their artistry. One phrase seamlessly flowed into the next section, but as “Glory” continued the direction in which it was going felt less clear. Sections ranged from solos to unison duets to a reprise of a solo and then double duets. They were danced for dance’s sake to beautiful music. One exception was a more quiet duet danced by Loris Bonani and Yu Otaguki where the two were able to engage with each other in a way that was tender and nurturing. It seemed to happen in real time which I so wanted at this point. Another startlingly beautiful and still section was the woman's solo with the parachute skirt. The fabric fluttered and spilled over the woman as adornment and then as a shroud, but it left us with no answer to how to feel about that moment or the women herself.

One audience member during the talk back said "It was very fast!" and Foniadakis replied that "In the front row, you might have been sitting too close." It could be a reality that this work looks different from far away. This new global pace of the world is much faster each and every day, but I find it interesting that we crave more slow culture in food and lifestyle than ever before. This 2012 work was a new interpretation from Foniadakis of what the world may become.