Adapted from Text by Gertrude Stein; Music by the Ensemble
Directed by Michelle Sutherland
Produced by Theater Plastique 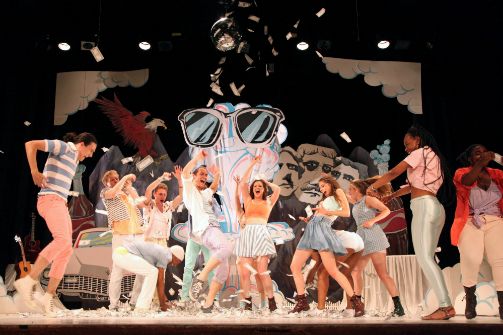 The cast of Gertrude Stein Saints!. Photo by Jordan Harrison.

BOTTOM LINE: I challenge anyone, even the most hard-hearted among us, to attend a performance of this chill-inducing new musical and leave as the person you were when you first took your seat.

There is a moment towards the end of Gertrude Stein Saints! when, after a much-needed moment of solitude, an ensemble member turns to her castmate with watery eyes and sings, "I felt this thing, I felt this thing, I felt this thing." I'm not ashamed to say that I too felt this thing, as did my date who emailed me early the next morning with, "That really was one of the best things I've ever seen." I agree with this sentiment, but disagree with the verbiage, because this is not a show that one simply "sees," this is a mind, body, and soul experience. It is incredibly rare in this city of theatrical over-saturation to stumble upon a production that completely reinforces your respect, admiration, and love for the craft. I will follow and champion this property for the rest of my life and hope that each exposure leaves me with this same sense of hope for the power of theatre to impact the human spirit.

But enough about me, let's talk about them. By them I mean the mind-blowingly talented group of performers who give themselves over to this material with unabashed enthusiasm. Each is given solo moments in which to shine, but it is because of their strength as a unified ensemble that this material soars to such exhilarating heights. In no particular order they are: Chante' Adams, Henry Ayres-Brown, Molly Griggs, Arica Jackson, Amanda Leigh Jerry, Johari Mackey, Jimmy Nicholas, Cara Ronzetti, Nathan Salstone, Siddiq Saunderson, Kelsey Tarantino, Jacob Vine, and Cater Woodson. Led by Michelle Sutherland, with direction that demands a great deal of skill and even more stamina, and looking smashing in costumer Diego Montoya's pastels the group sings and dances with gleeful abandonment yet always remains in control of the unconventional material.

Adapted from Gertrude Stein's libretto for Four Saints in Three Acts, the piece is a non-narrative onslaught of words, phrases strung together in a seemingly incoherent manner that does not lend itself to conventional interpretation. However, when set to music that runs the gamut from pop, to soul, to American roots, to gospel, hip-hop, and even rap, it has the power to transcend the limits of storytelling and genre.

The score was composed by the original ensemble of performers at Carnegie Mellon University and further expanded for its FringeNYC run in August of 2013. Performed largely a cappella, it is a staggeringly complex and challenging work, ambiguous in its meaning, but universal in its messages. As a sung-through piece it's more a song cycle than a musical, but lines can be drawn to Hair, Spring Awakening, Myths and Hymns, American Idiot, and even West Side Story. However, these similarities have little to do with form or content and more to do with their power to reach far beyond mere entertainment. In fact, placed in the proper creative hands, they can be the sparks of social ignition, unifying an audience with a shared sense of awe for the human condition.

Gertrude Stein Saints! is like nothing I've experienced before and finding the proper words to describe what it has to offer an audience is challenging. You will appreciate the skill of the performers, the wit of the direction and staging, and the enthusiasm with which it is presented. But above the obvious talent behind each and every aspect of Theater Plastique's production, the piece is at heart a document of joy, a celebration of life, a kumbaya refuge in a sea of cynicism.

(Gertrude Stein Saints! plays at Abrons Arts Center, 466 Grand Street, through June 28th. Performances are Tuesday, June 17 at 8PM and Thursday through Sunday at 8PM. Tickets are $20 general admission and are available at abronsartscenter.org or by calling 212.352.3101.)