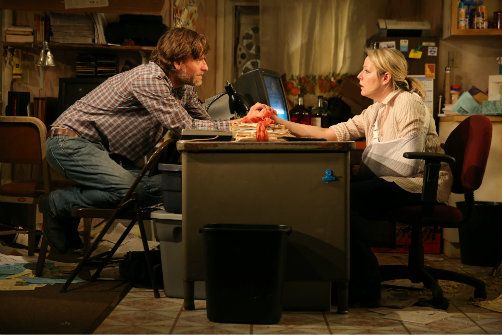 Michael Laurence and Tasha Lawrence in The Few. Photo by Joan Marcus.

BOTTOM LINE: A captivating portrait of the lonely life of people who write about the loneliness of truckers who sometimes swerve off the road.

Samuel D. Hunter knows loneliness. Specifically, he knows loneliness in Idaho. As the playwright of last season’s award winning play The Whale, he mined the life of a morbidly obese gay online English professor living in the same portion of the country. There’s something about Hunter’s Northern Idaho roots that transcends to stages in New York and elsewhere. It’s his nuanced crafting of isolation and his empathy with characters on the fringe of American affluence. With The Few, now playing at Rattlestick Playwrights Theater in a methodically directed production by Davis McCallum (director of The Whale), Hunter explores the lives of three people connected through a newspaper for the loveless and lonely truck drivers that pass through their small Idaho town.

The Few comes to Off Broadway via a production at the Old Globe in San Diego. It has kept two of the same actors (Gideon Glick and Michael Laurence), and is rounded out with the addition of Tasha Lawrence (also from The Whale).  Together with McCallum's direction and Hunter’s intimate and textured dialogue we get characters that are instantly recognizable and yet a world away. Hunter’s mechanisms and plot devices get in the way occasionally, but the attention to characterization keeps us transfixed with the trio through the end.

The year is 1999; we know this by Dane Laffrey’s impressively detailed set complete with clunky CRT monitors running Windows 98 screensavers. QZ (Lawrence) is running  a newspaper known as “The Few” which was once a source of comfort and connection for truckers in the region. She has since turned the paper into essentially a collection of personal ads for the companion-seeking drivers, described at one point as “Hot Trucker Monthly.” She writes one actual column a week along with the made-up horoscopes.

At the top of the play QZ is reading her latest report on Y2K which “could quite possibly plunge us into a worldwide depression.” Bryan (Laurence) embodies a good deal of that depression. As one of the original founders of “The Few” he has returned after a mysterious four year disappearance which left his ex-girlfriend and ex-partner QZ alone. Bryan left just two days after the funeral of their third partner, Jim who committed suicide behind the wheel killing a family on his way out.

QZ’s version of the paper is profitable if not spirited. Jim’s nephew Matthew (Glick) is now working at the paper as an all-purpose office assistant dealing with the likes of floppy disks and deliveries. He was inspired by the former life of the paper and is encouraged that the return of Bryan will lead the paper back to its mission when it was written for the truckers – when it was “something for the few of us who need it. Something to remind us, the few of us who live this way, that we still exist.” Matthew also connects to the sentiment as a gay teenager in rural Idaho.

QZ is flummoxed by Bryan’s return, angered by his abandoning her four years ago. She has since kept up a pen pal relationship with Bryan, who is writing under a pseudonym. The letters last left off with “Rick” proposing marriage to QZ. Hunter's scenes between QZ and Bryan involve a lot of what is left unsaid between the two. Their relationship plays as complex while at the same time stalled. QZ’s decisions are more fathomable than some of Bryan’s, giving Lawrence the more focused performance. Laurence struggles with his character’s derailment. Even if he has all of Bryan’s intricacies figured out in his head – McCallum and Laurence have yet to figure out how to translate it to action.

Hunter’s dialogue is impressively naturalistic even if the plot turns can be forced. He excels at creating a fly on the wall sensation. However, part of the problem with The Few is that it wants to exist in close-ups. McCallum stages Hunter’s moments of staring contests as best as possible but the subtleties are hard to transcend beyond the edge of the stage. Too much time is spent talking about the past to keep these characters moving forward at a pace that merits the amount of information about the past we take in.

Glick brings a burst of nervous energy to the character of Matthew each time he’s on stage. His anxious mannerisms and speech patterns instantly peg him as an outsider. Matthew possesses the most potential to move out of this tiny interstate exit town and onto something better; somewhere more accepting of his own differences. The most likely place suggested is Portland. Hunter also gives Matthew the biggest capability to change Bryan and QZ.

Even if Hunter’s plot exists in starts and stops, he successfully has shed a spotlight on a world not often given the chance to be seen. The characters are all stuck in this place and for the 90-minute duration of the play the audience is stuck there with them. It’s a sensation that is not unworthy of the experience. I only wish Hunter relied on this sensation more instead of throwing in the dramatic plot turns and moments of overtly acting out. As of now it’s caught somewhere between having a strong story arc and being a naturalistic character study – either could work.

The world and occupation of Hunter's characters are foreign and fascinating enough. If a newspaper like “The Few” exists now it’s probably a blog and likely deserving of a “This American Life” segment. The interesting part of surviving a life with little human connection is not  the extremes these people take to break out of a lifestyle, but their endurance at adapting to the loneliness.