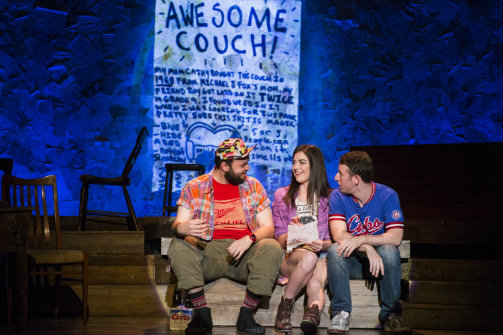 BOTTOM LINE: An extremely talented cast and a heartfelt score and book make Found a highlight of the season so far.

Found follows the adventures of Davy (Nick Blaemire), who loses his job and gets mugged in the same day. He discovers what he thinks is a parking ticket on his car, but instead it turns out to be a note for someone named Mario. Mario has apparently been cheating on his girlfriend Amber. Spurred on, Davy spends the rest of the day collecting other discarded pieces of paper. He brings these home to his roommates Mikey D. (Daniel Everidge) and Denise (Barrett Wilbert Weed). Together they come up with the idea of creating a magazine out of these notes and the rest of the show follows their trials and tribulations in dealing with the potential of fame and success.

It’s a quaint idea, but the notes themselves help to elevate it further: as Davy says, he has "hundreds of these notes, some funny, some heartbreaking, but they all make you feel less alone and more human." That line captures the entire piece as it is almost always funny, sometimes heartbreaking and yet points to the truth that we’re all in this crazy world together. Whether the misspelling of a young boy writing about "liyins," angry notes filled with expletives, or a woman trying to reconcile multiple miscarriages, the expressions of society seem all the more honest when they are anonymous. Some letters are short and become small commentaries on the action, while others are expanded upon into larger sequences such as the “Great Lakes Bears” social club and a school production of the play Johnny Tremain where the behavior of students cause the fifth grade teachers to only allow those with high grades in conduct to be invited on future field trips.

The score by Eli Bolin is lovely and varied ranging from theatre pop to takeoffs on rap and boy bands. The script by Hunter Bell ([title of show]) and Lee Overtree moves along swiftly and sincerely while allowing for short interceptions of various notes read by the ensemble. Blaemire is a triple threat (the kind that makes my younger theatre student self more than a little jealous). Both Everidge and Wilbert Weed are also relatable and the three leads together more than sell the show. The whole ensemble also has plenty of chances to shine, most notably Danny Pudi in pretty much every one-liner he delivers and Andrew Call whose “Lord Patrick, King of the Ladies” was probably my favorite song/letter of the piece.

Overall, I found this intimate show to be one of the more enjoyable theatre experiences I’ve had so far this season, proving yet again that often off Broadway fare can be just as good, if not better, than what is playing on Broadway. I definitely hope that this piece gets an open-ended transfer as well as a cast recording. In the event that it doesn’t I highly recommend making down to the Atlantic Theater this month to take it in.

(Found plays at Atlantic Theater Company, 336 West 20th Street, through November 9, 2014. Performances are Tuesdays at 7PM; Wednesdays at 2PM and 8PM; Thursdays and Fridays at 8PM; Saturdays at 2PM and 8PM; and Sundays at 2PM. Tickets are $75. To purchase tickets visit ovationtix.com or call 866-811-4111. For more show information visit atlantictheater.org.)