By Suzan-Lori Parks; Directed by Jo Bonney
Produced with the American Repertory Theater 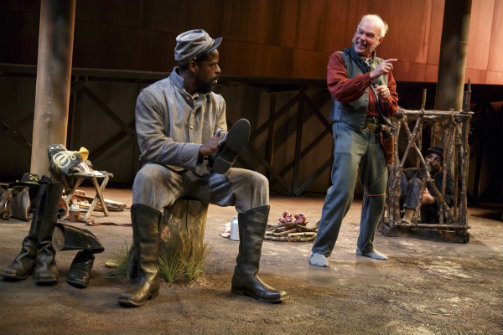 BOTTOM LINE: Suzan-Lori Parks continues her singular exploration of freedom in America with a brilliant new cycle of plays.

Father Comes Home from the Wars (Parts 1, 2 & 3) is three sections of a projected nine-play cycle by Suzan-Lori Parks. And if this first trilogy is any indication, the Pulitzer Prize-winning playwright is in the process of making a monumental contribution to American theater. By turns sassy and sobering, the current evening alone represents her best work since Topdog/Underdog, and possibly her greatest writing to date.

It takes place over a year and a half in the American South of 1862-63, and it beautifully casts intimate scenes against an epic canvas. The first of the three plays is titled “A Measure of a Man,” and that is an abiding theme throughout. Hero (played with startling delicacy and power by Sterling K. Brown) is a slave on a Texas plantation who, in the waning moments before sunrise, must make a momentous choice: go off with his Confederate master and fight nobly in the war (albeit for the wrong side), or remain in the relative safety of the plantation with his wife and surrogate father (energetic performances here by Jenny Jules and Peter Jay Fernandez, respectively). He’s been promised freedom after the war if he goes into battle now. Of course, if the other side wins, he’ll get that anyway. But names are vitally important in Parks’ world and Hero is forced to take a measure of himself to see how best to live up to his moniker, even if it is one that was forced on him by his owners. He immediately rejects, with questionable logic, a rather obvious third option -- seize his freedom now by running away -- which is a hint that we’re dealing with a hero of rough-edged complexity.

In the second and most tightly constructed (and masterfully performed) of the plays, Hero, his Colonel/master (the excellent Ken Marks), and a mysterious Union prisoner (played by the always tremendous Louis Cancelmi) put the question of Hero’s value to a perversely literal test. Later, Hero confidentially asks the prisoner what he’ll be worth once he gains freedom. And when he’s told that he “won’t have a price...that’ll be the beauty of it,” Hero responds, “Where’s the beauty in not being worth nothing?” Looking ahead to future challenges to his emancipation, he notes, “Today I can say ‘I belong to the Colonel.’ ...That’s how come they don’t beat me. But when Freedom comes and they stop me and ask and I say ‘I’m on my own and I own my ownself,' you think they’ll leave me be? Seems like the worth of a colored man, once he’s made Free, is less than his worth when he’s a slave.”

These are terribly poignant thoughts in light of what we know of the ensuing 150 years of American racial politics. This is no tidy history lesson that Park offers, but a provocative look at those who are perhaps still bearing the “mark of the marketplace,” as one character phrases it.

Parks and her astonishing director, Jo Bonney, leave no doubt that the run towards freedom is an ongoing race, with both classical and contemporary resonance. Scenes move from verse dialogue, to naturalism, and then to a mixture of both; and all are interspersed with original blues tunes composed by Parks herself and performed by Steven Bargonetti, who is not only a terrific musician, but a compelling presence onstage (or to be more specific, off to the side). Meanwhile, anachronisms are lightly sprinkled into the first and third plays -- sudden, brief phrases pop up that may as well come right out of UrbanDictionary.com; a talking dog who is half Greek prophet, half Wilfred stops the show (thanks quite a bit to the force of nature that is actor Jacob Ming-Trent); and, in the passionately intelligent contributions of costume designer Esosa, modern apparel items suddenly appear in the midst of Confederate greys and cotton dresses. It’s not hard to notice that sneakers, in particular, are favored by those slaves who are on the run, most notably a rival of Hero’s played with quiet intensity by Jeremie Harris.

References to the Bible and Homer’s The Odyssey abound. “You don’t know the old stories, but I do,” declares one member of a Greek-like chorus, made up of Russell G. Jones, Julian Rozzell Jr., and Tonye Patano. “Old stories, they guide us,” says another. “Each its own north star.” Parks knows many of the old stories. And her latest work is an essential text to guide us from them into a new generation, and to help each one of us take a measure of these souls and of ourselves.