Off Off Broadway, Dance/Performance
Runs through 3.22.14
Arts@Renaissance, 2 Kingsland Ave, Brooklyn
(NOTE: GPS may send you to the wrong address, the theatre is located on the corner of Kingsland Ave and Maspeth Ave, near the Graham Ave L train) 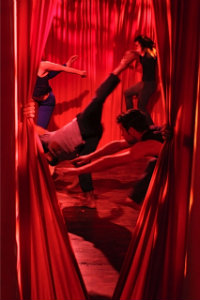 A scene from FOUR CHAMBERS. Photo by Julie Lemberger

BOTTOM LINE: I can’t recall the last time I was in a room of humans with such an acute awareness of our humanity.

Lucky for us, Jody Oberfelder's theatrical creation that enjoyed an acclaimed run on Governor's Island last summer has resurfaced in Brooklyn. 4Chambers can perhaps best be defined as a guided, interactive movement and dance experience; but, to be perfectly honest, any definition of 4Chambers will inevitably fall short of capturing what it really is. “Experience” is certainly more fitting than “play” or “show,” because, as an audience member, you are as integral to the thing as the performers are. But there isn’t that palpable discomfort and fear of embarrassment that is often the signature of audience participation theater. That’s not to say you’ll never feel vulnerable or self-conscious. You will, but that shouldn’t scare you off. See, the thing about 4 Chambers is that it provides a wonderful escape from the reality of your everyday life -- kind of like Sleep No More, but on a starkly intimate level.

The second of the “four chambers” in which this experience unfolds is called the “Physical Chamber.” The Physical Chamber is a bright (but softly so) empty room with peach colored walls and a hardwood floor; it is here that I first felt the outside world shrink away to a distant memory. My guide, who I later learned was named Mary Madsen, took my hand and led me around the room. At times we sort of danced, at times we sort of frolicked, and most of the time she maintained some serious eye contact. Yes, I was very aware of myself.

Eventually Mary planted me against a wall, where I watched these people -- 12 audience members and 6 performers -- move together. Drawing on intuition and impulse, there were people rolling on the floor, dancing in waltz-like fashion, and sliding down the walls. This all may sound silly or even horrifying to someone who wasn’t there, but everyone in the room was engaged and fully immersed in the moment and, well, it was really something! The only words I heard uttered in the Physical Chamber were by a woman who I surmise had come to the show with a group of longtime friends. As she watched her friends (all beautiful and chic middle-aged women) roll around and prance -- probably doing things she had never seen them do before -- she wept a little and said, “it’s so beautiful.” It was.

Eventually, we were all planted against the wall to passively observe the dancers fully showcase their talents in an extremely physical number that could very well have been performed up on a stage at the Joyce Theater. Instead, it was happening right around us, so close at times I thought my face might get kicked in. Of course it didn’t.

The other rooms (“chambers”) and their connecting hallways (“arteries”) used other avenues to pluck at our minds, feelings, and of course our hearts. Only once did I feel the momentum lag, in the “Artery of Knowledge.” This room, outfitted with iPads, functions like an interactive exhibit at a science museum. Though its goal of education is an admirable one, I couldn’t help but feel the real world, that I had so joyfully left behind, begin to creep back into my awareness.

The over-arching theme of 4Chambers, as you may have guessed by now, is the heart. Much of the dancers’ movement is meant to either imitate the action of the heart or to stimulate the eighteen hearts in the room. At key moments, Mary placed my hand on either her or my chest, bringing up a visceral awareness of that muscled organ that was at times beating calmly, at others pounding away in our chests.

Perhaps 4Chambers isn’t for everyone, but I like to think it is. Watching an eclectic group of strangers become more and more immersed in this strange experience was uniquely memorable and even kind of magical. Yes, you have to participate, but more than that you are guided. Yes, it can be quite physical, but with their remarkably precise intuition I expect that the performers could accommodate almost anyone. And, yes, you take your shoes off (you aren’t forced to, but you should), so remember to wear clean socks. And, in order to get the most out of the experience, I recommend either going alone (as I did) or going with companions with whom you are comfortable enough to truly be yourself. You wouldn’t want to compromise the potentially transformative nature of this thing by concerning yourself with what your friends are thinking of you while you’re rolling around on the floor.

I found myself a little sad when I encountered two women who had also been in the 4Chambers with me on the subway platform and, back to being regular old New Yorkers; we didn’t acknowledge each other. But, then again, I was also feeling a sort of newly realized kinship, not just with them, but with everyone waiting on that platform. It felt as if perhaps all our hearts were beating together in time while we waited for the L train to arrive.

(4Chambers plays at Arts@Renaissance, 2 Kingsland Ave, Brooklyn, through March 22, 2014. NOTE: GPS may send you to the wrong address, the theatre is located on the corner of Kingsland Ave and Maspeth Ave, near the Graham Ave L train. Performances are Thursdays at 6:30PM and 8:30PM, and Fridays and Saturdays at 7PM and 8:30PM. Tickets are $60 ($75 after Feb. 1) and are available at ovationtix.com or by calling 212.777.6227. More show information at jodyoberfelder.com.)