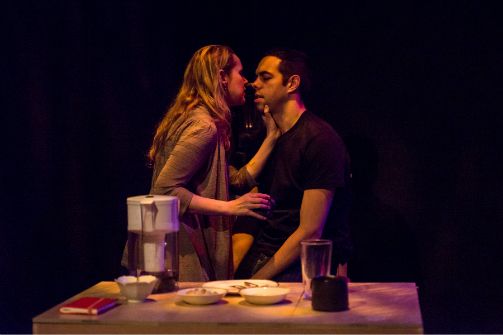 BOTTOM LINE: In its first New York City mounting since the original production at Lincoln Center, the Seeing Place Theater puts forth an admirable revival.

In Dying City, Kelly Connors (Erin Cronican) is a widowed wife of a casualty in the Iraqi war. Although she is a therapist, she has managed to completely bury her grief over the loss of her husband Craig until a surprise visit from his identical twin brother Peter. Brandon Walker portrays both brothers as the scene shifts between the 2005 present and the night before Craig left for the war in 2004. While ostensibly reaching out to form a connection with his sister-in-law, it seems Peter’s showing up is an invasion of the home quite akin to those Craig is forced to enact under orders in Iraq.

Christopher Shinn’s piece is endlessly thought-provoking and frustrating as we watch these three immensely self-destructive characters circle around each other. Kelly is extraordinarily passive, allowing the twins to run rampant over her sense of self with the same ferocity she allows her patients to, perhaps as a result of her mostly absent father. Craig is a philanderer with a penchant for violence and Peter is as self-loathing an example of a gay actor as I’ve ever seen, also sleeping with his ex and his co-star while not sleeping with his partner.

But what Shinn is really addressing in the piece is a much deeper form of self-deception that exists in America. We watch "The Daily Show" and laugh at Jon Stewart’s lampooning of the far-right, but we don’t do anything about it. We fantasize while watching the never-ending stream of procedural crime dramas on the television that our lives mean more to our communities than perhaps we do. And while we continue to march to the drum of the television we allow those close to us to fall into ruin.

Cronican is stellar and heart-breaking as Kelly and enables the audience to relate deeply with a person that we’d likely have little patience for in the real world. Walker also does an admirable job as the brothers. While the pacing of the piece as a whole felt a bit slow (and it is early in the run and could definitely tighten on its own), I do feel it could benefit from a more aggressive approach. I’ve always regretted that I missed both the original production at the Royal Court in London as well as the Lincoln Center production; the Seeing Place Theater’s version is a fine representation of the play for those who didn’t get to catch it the first times around.