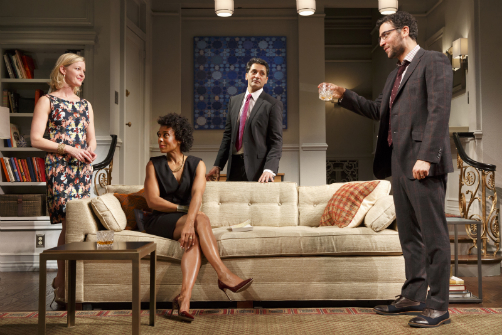 BOTTOM LINE: Dinner parties get bleak fast when race and religion mix with liquor and repression.

It sucks to be...everyone? As I leave the theater searching for a takeaway from Ayad Akhtar's dark Pulitzer Prize-winning Disgraced, now receiving its Broadway debut at the Lyceum Theatre, this seems to be it.

Akhtar introduces us to four religiously and ethnically distant characters, who, by the climax of the play, are confined to the inestimable prison of a dinner party, and allows the tension to reach a boiling point. Amir Kapoor (Hari Dhillon), a South Asian-American who has aggressively disavowed his Muslim upbringing for years, hopes to be made partner at his law firm, but fears reproach after a New York Times article misleadingly represents him as counsel to a local imam accused of aiding terrorists. His wife Emily (Gretchen Mol), a painter who’s recent Islam-influenced work has caught the eye of Isaac (Josh Radnor), a curator at the Whitney, hopes to be included in a prestigious forthcoming show. Finally with striking convenience, Jory (Karen Pittman), Isaac's African-American wife, works alongside Amir at the same office, also vying for promotion and fielding offers from competing firms.

As the play unfolds (a rushed 9 months told over a brisk 85 minutes), the four find themselves at Amir and Emily's apartment for a dinner where Emily anticipates being awarded inclusion in Isaac's show. It's all politesse and social graces until the conversation shifts to politics and religion, to 9/11 and the Israeli-Palestinian conflict. As graces are rapidly disposed of, challenging questions of contemporary religion and assimilation come to the fore.

The most troubling issue at play is voiced by Amir, speaking of the radicalism of fundamental Islam: “Even if you’re one of those lapsed Muslims, sipping your after-dinner scotch alongside your beautiful white American wife,” he says, pouring himself another, “seeing folks in Middle East dying for values you were taught were purer -- and stricter -- and truer...you can’t help but feel just a little bit of pride.” His words strike at the central concern of the play: what remains of a foresworn cultural past?

Through Amir, Akhtar gives voice to a deeply unsettling point of view on the subject of Muslim life in America, stoically embracing the politically incorrect and the uncomfortably stereotypical, and following them to their logical, if discouraging, end. The anger and entitlement, both Amir’s and the Radical Islamists, are not accidental, not anomalies.

While Akhtar’s dexterity as a writer and thinker are clear throughout the play, the performances sometimes lack the depth needed to underscore the heady pontificating, and frequent plot contrivances. And some of the movement feels stiff and unnatural, with large swaths of the play occupied with fierce finger-pointing Olympics. Sexual infidelity arrives neatly packaged late in the play and draws attention to a world that seems too clean cut. More than this, its easy to slip into apathetic disinterest watching Amir struggle through the stress of losing a promotion having just boasted of the “ridiculous thread count” of his $600 shirt while prancing around his lush Manhattan apartment (tastefully designed by John Lee Beatty).

The explosive collision of black-brown-white and Muslim-Jewish-Christian in Disgraced demands a close look at our Western understanding of foreign conflicts -- both personal and political. Akhtar’s voice is a welcome and needed one on the American stage, and it fascinates even when the production missteps.