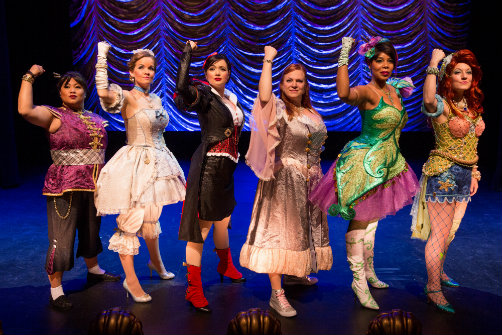 BOTTOM LINE: A riotous gallery of costumes steal the show in this zany satire of Disney princesses.

Turning classic children’s stories inside out has been a popular pastime since at least the “Fractured Fairy Tales” of the 1960s. And with the cultural peak of that genre, Stephen Sondheim’s Into the Woods, hitting movie screens this season, what better time for Disenchanted!, a musical revue that puts the spotlight on the long-suffering princesses of these tales?

Dennis T. Giacino, who has written the book, music, and lyrics to this new show, doesn’t just send up the old stories, but the particular versions of them presented by the Disney Corporation over the past eight decades. Ten familiar names trip across the stage, from Snow White (Michelle Knight) to the Princess Who Kissed the Frog (Soara-Joye Ross). And they definitely have issues they’d like to discuss, from race representation, to dream princes who haven’t quite measured up, to the woes of being objectified by generations of sexually frustrated animators.

“We’d like feature films and fairytales to feature more than girls with veils!” they lament. “Who ride off with some guy they met one page before.”

All six performers in director Fiely A. Matias’s cast bring with them heavy doses of octane and sass, not to mention genuinely lovely vocal blends. It’s a particular pleasure to watch two of them -- the wonderful Alison Burns and Lulu Picart -- tackle six princesses between them. Matias allows a few moments of semi-improvised comic business to drag a bit. And Giacino could easily afford to trim the introductory dialogue that over-explains the show for us.

But both gentlemen, who have been personal and artistic partners for years (I first saw them in an all-male version of “The Golden Girls” in the Village in the early 1990s) are clearly having a blast blowing up a classic or two. Giacino’s bouncy melodies range in style from Motown to country western, with pleasing dollops of Disney pastiche to spice them up here and there. And the show’s musical staging, by Matt West, doesn’t hesitate to follow up some corps de ballet realness with a bit of the old bump and grind.

However, the true standout star of this production is costume designer Vanessa Leuck, whose major credits include Disney on Ice: Frozen and Disney Live!, plus a gig assisting for Broadway’s Little Mermaid. This is a woman who knows her princesses. And she puts a quirky, individual stamp on each of the ten major costumes here. Some start with familiar source material and then get that extra salient push into absurdity, like the steampunk-influenced Snow White and the Cinderella of Becky Gulsvig, whose miniskirt version of the famous gown gives her a touch of the naughty French maid. Others are almost traditional renderings, until you look closer and notice that Jen Bechter’s Sleeping Beauty is wearing shimmery silver and pink sneakers and Picart’s Mulan has chopsticks in her hair. Still others go sailing gleefully into Ridiculous Theatre territory, like Burns’s Rapunzel, who sports a unibrow and has the image of a giant bratwurst stitched into her corset. Probably the best of the bunch is Picart’s Aladdin princess costume. Her magic carpet ride has to be seen to be believed.

I’m not entirely clear what the target audience is for Disenchanted! There are a lot of little girls who would do well to hear Giacino’s acid take on the “Toddlers & Tiaras” generation. But the humor in this show is definitely not in the G-rating range. Maybe there’s a Disenchanted! Junior in the works.

(Disenchanted! plays at Theatre at St. Clement’s, 423 West 46th Street at Ninth Avenue, through January 25, 2015. Performances are Mondays and Tuesdays at 7PM; Thursdays and Fridays at 8PM; Saturdays at 3PM and 8PM; and Sundays at 3PM and 7:30PM. Check for holiday schedules at disenchantedmusical.com. Tickets are $78 and are available by visiting ovationtix.com or calling 866.811.4111.)