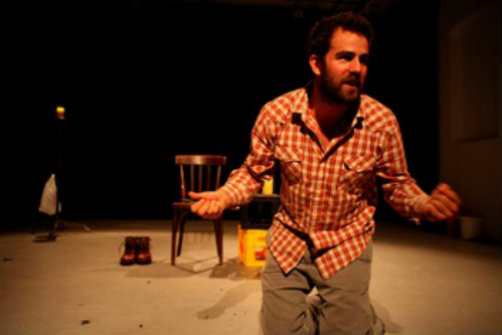 BOTTOM LINE: A compelling narration from the point of view of an illegal Iraqi immigrant whose alienation and conflict in his adopted country becomes internalized.

If our personal stories become our identities, then it is important to remember the way in which the one character in Dirt chooses to begin his story: “My name is Sad, but I am not sad”. Sad (pronounced “sod” like the English word meaning “dirt”) is not sad (pronounced like the English word meaning "not happy"). As a visibly impoverished, sweat-stained, raw onion-eating, illegal Iraqi immigrant making a meager living as a rose peddler in his adopted country, Sad (Christopher Domig) repeats those initial words throughout Dirt hitting varying notes that belie the actual meaning. Indeed, the first phrase becomes the refrain that pulses throughout this multi-layered performance of immigrant identity – or more specifically a performance of Arab, Iraqi, outsider, marginalized, self-hating, often-hated, culturally different “other”. And even if Sad claims he isn’t sad, he gives you a lot of reasons to doubt this claim or, at the very least, to give him leave to feel a lot of other powerfully unpleasant emotions.

Interestingly, Dirt is a translation of an Austrian play that premiered in 1993 and was performed throughout Europe during the 1990s. Domig has performed the American version in various American cities and throughout Europe since 2007, and his performance is indeed impactful. Nevertheless, the primary feeling I came away with was not that of having been moved by one immigrant’s experience so much as that of having watched a politicized idea of the immigrant experience.

Dirt definitely does its part to be a cautionary tale about the personal, human impact of xenophobia, but for me, it veers too close to marginalization-as-projection rather than how marginalization can insidiously and internally manifest in reality. That is not to say that Dirt does not hit on important themes of racism, inculcation, desolation, fear, rage, and displacement. But my suspension of disbelief was strongly challenged by watching Domig, with his remarkably white teeth and remarkably non-Arab complexion, playing an undocumented, impoverished Iraqi man who looks into the distorted mirror and tells us he knows he has no right to belong among the Western white ladies and forty-year old wealthy white men to whom he peddles his roses.

At several points in the play, Sad becomes the mouthpiece for the racist comments that he, no doubt, hears, understands, and internalizes. While these moments are jarring and, most likely, are meant to be, they seem overly compliant and, ultimately, as unrealistic as the scene in which Sad bites into a raw onion like it was an apple – an action which plays as more dramatic and emblematic rather than authentic or accurate. So while Dirt has the ability to be somewhat thought-provoking in its subject matter, I wish that I could say I was provoked enough to feel something or be mobilized by the experience of witnessing Sad's narration unfold. I definitely did not leave the theater feeling sad, but I kind of wish I had.

(Dirt plays at The 4th Street Theater, 83 East 4th Street, through October 12, 2014. Remaining performances are Friday at 8PM; Saturday at 3PM and 7:30PM; and Sunday at 3PM. Tickets are $20 and are available at brownpapertickets.com. For more information, visit theplaydirt.com.)