Off Off Broadway, New Musical
Runs through 8.24.14
Flamboyan Theatre at the Clemente, 107 Suffolk Street 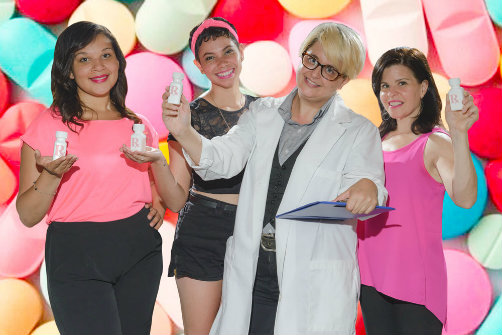 BOTTOM LINE:  Writer/actor Marianne Pillsbury and director Gretchen Cryer put a great effort in creating a fun, campy musical comedy meant to share a personal story and spread awareness about mental illness, but it doesn't quite come up to snuff.

If you're aiming to write a pop-rock musical and have yet to figure out the theme, mental illness may not be at the top of your list. Still, it's difficult not to be drawn in by a sort of morbid curiosity when you hear the title of this show. Pillsbury plays herself in this autobiographical look into depression. She's a single, 38-year-old female living in New York who suffers from clinical depression. Guiding us through the ups and downs of depression with songs and trips to therapy, Pillsbury introduces us to the relationship woes, family stresses, and prescription cocktails she encounters whilst working on her musical—yes, the very musical we're seeing onstage.

It's refreshing to witness a musical that dares to tackle mental illness with a bit of humor and yet also provides resources regarding depression. (The program includes a brochure about depression, and the after party for the first showing included a meet up with mental health professionals.) Though Pillsbury's onstage self pokes fun at the occasional self-prescribed “depression” of her generally happy and fulfilled friends and family members, and pointedly differentiates this from her clinical depression, it is clear that in the writing of the show, Pillsbury has aimed for inclusivity and mutual understanding. Here is a show that's not only for people who suffer from depression, but also for people who feel lost, romantically confused, anxious, lonely, mentally blocked and bothered by troublesome family members.

For a show that proudly brands itself a musical, it fails to make the best of its musical elements, as the songs—at times cute and almost always campy—do little to inform the plot or characters, but instead are lackluster numbers with forgettable melodies and lyrics that aim at humor but don't always quite hit the mark. However, there are exceptions. “Bordering on Beautiful” exhibits a brand of clever humor and wit that would have been great to see throughout the show, and “Is It Me?” has Pillsbury's character dip into a place of open vulnerability that the audience doesn't really get to see otherwise.

Pillsbury's character arc is a bit too predictable at times, such as in her sudden game-changing revelation and tidy ending numbers. And not all of the show's resources are fully taken advantage of, like The Committee in Marianne's Head (who act as backup dancers, commentators and a 1960s girl-group-style Greek chorus) being inconsistently used as representations of secondary characters. Additionally, Pillsbury seems to struggle with the characterization of her onstage persona. The performance and writing of the character lack dynamism; while we hear about Pillsbury's emotional extremes, self-reflective growth and psychological development throughout the show, we don't actually see it for ourselves. By the end of her journey, Pillsbury purports to suddenly have a new perspective and understanding of her situation thanks to a cliché deus ex machina dressed up as a wise old man, but this revelation is just a little too quick and easy to be believable. Pillsbury also simply seems uncomfortable with the task of portraying herself, as she acts with a self-conscious restraint that affects the realism of the character.

In general, the musical seems to only skim the surface in terms of its central character and her mental illness. Seemingly more interested in its campy humor than in its narrative development, the show skips through Pillsbury's emotional struggles, anxieties, and problems to create the illusion of a full character arc that turns out to be little more than an outline.