Daughters of the Sexual Revolution 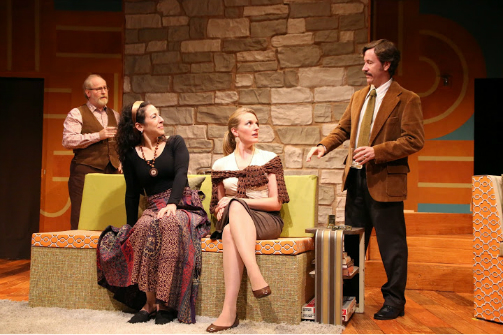 BOTTOM LINE: Three women make life-changing choices regarding their sexual freedom in this engaging -- and at times comedic -- drama about sex, liberation and personal ethics.

Oh, the '70s -- a time of bellbottom jeans, bright shades of orange and yellow prints, controversial politics, and the sexual revolution. In Dana Leslie Goldstein's new play Daughters of the Sexual Revolution we head to Westchester, N.Y., in 1976, where her female protagonists are having their own personal sexual revolutions. Judy (Laurie Schroeder), an anxious, unhappy housewife, is married to a psychiatrist, Liam (Greg Oliver Bodine), who feeds her Valium at ever turn. She is also having an affair with their neighbor, Joyce (Christine Verleny), an older, liberal woman who is married to the amicable and cheesy Ed (Michael Selkirk). Meanwhile, at a college in Connecticut, Joyce and Ed's daughter, Stacia (Alyson Lange), loses her virginity to Simon (Luke Hofmaier), a boy from her college ethics class who gets caught up in her drama. When Stacia brings Simon home with her for vacation, he stumbles upon the illicit affair between Judy and Joyce and all three women are affected.

The play begins with the relationship between Judy and Joyce. They're a fascinating pairing from the start; Judy is neurotic and anxious, sometimes in a darkly humorous way, and Joyce is strong, assertive, passionate and confident. It's easy to empathize with this odd couple, as Schroeder's Judy squirms and shakes under the thumb of her controlling husband and Verleny's Joyce, for all her charm, also shows her vulnerability and the compromises she has had to make in her life. Both Schroeder and Verleny do a great job with their characters, with Verleny in particular presenting a strong, likeable, charismatic female whose emotional seams start to show. Meanwhile, Stacia tries to gain an understanding of ethics and sexual liberation, but is unable to see past her selfish, manipulative actions and self-righteous arguments long enough to do so. Stacia's not nearly as sympathetic of a character, but Lange still captures the folly and hubris of a younger generation that is obsessed with the idea of its independence, even to the point of appropriating the struggles and ideals of earlier generations. However, Hofmaier's Simon counteracts that, with a sense of honesty, morality and awareness that ultimately affects his relationship with the volatile Stacia.

Even though we know for a fact that this play is firmly set in the ʼ70s -- a fact driven home by the political references woven into the background of the dialogue, the sexual politics at the forefront, the fitting costumes of flared jeans and jumpers, and the bold orange prints and shag rug on set -- we are not totally isolated within that time. Joyce, Judy and Stacia each represent a different generation's reaction to gender and sexuality. Joyce, who's 40 and came of age in the ʼ50s, favors denying herself her true desires for a life of contentment. Judy, who's in her early 30s and came of age in the ʼ60s, is prepared to start a life she actually wants for herself. Stacia, who's 18 and is coming of age in the ʼ70s, is invested in her idea of independence and thinks she knows what's best for herself, but is blinded by her arrogance.

The question of sexuality is a confusing one, especially when placed within the context of the supposedly picture-perfect setting of the heteronormative suburban American family in the '70s. Judy and Joyce, whose lives are framed by a time when women were considered less than and were defined by men, feel like conspirators, not only as lovers, but also as actors in roles they're not suited for: happy wives with happy husbands with happy children in happy, suburban homes. They are unsatisfied with their circumstances, but the play does not make it as easy as a situation of two wronged, disgruntled women acting out in response to their hateful, chauvinistic husbands. To say so would disregard the relationship of the two women as simply reactionary, and besides, Judy and Joyce's domestic situations are different. True, Judy and Liam have a relationship that we can immediately tell is toxic. The pompous, narcissistic Liam analyzes everyone around him, sleeping well with the thought that through his clever analyses and endless supply of prescription drugs, he can be a savior to his patients and to his wife. Obsessed with his cruel and manipulative method of control, Liam treats his Judy like a child or helpless pup until she finds the strength to try and oppose him. The story arc of Judy and Liam's relationship isn't very unique and feels familiar (e.g., Nora and Torvald in A Doll's House, among others), but even so, Judy is no less sympathetic of a character as a result, and the story is no less compelling.

Joyce and Ed, on the other hand, have a friendly, comfortable relationship. Selkirk, as Ed, hams up his performance with a cheesiness that feels like it's been taken straight out of a 1970s sitcom, but he still knows when to lay out a line straight when necessary. Overall, Ed is lovable and definitely comical, as are all the characters -- mostly intentionally, as their comedy comes from their mania, their panic, their flaws and their problems rather than slapstick or cutesy dialogue.

While the three female protagonists of this show are certainly not wholly representative of the females of their generations, they are reflective of different societal pressures and different reactions women may have had to sexual and gender norms based on the circumstances they were in as they came of age. But this play is not only about female sexuality; rather, it's about men, society, expectations and morality, and, of course, the effects of a powerful revolution that we're still feeling today.

(Daughters of the Sexual Revolution plays at the WorkShop Theater, 312 West 36th Street, through October 11, 2014. Performances are Thursdays at 7PM; Fridays and Saturdays at 8PM; Sundays at 3PM; and an added show on Monday, October 6th at 7PM. Tickets are $18 general admission, $15 for students and seniors, and can be purchased online at workshoptheater.org or by calling 866-811-4111.)