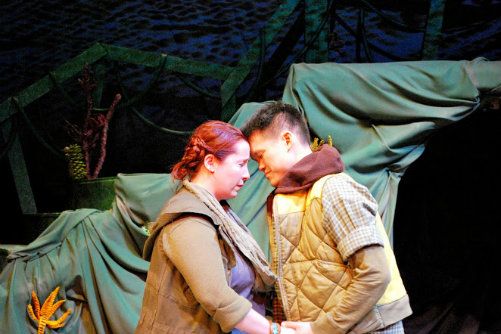 BOTTOM LINE: A haunting environmental fable based on a continuing real-life tragedy.

The Deepwater Horizon spill in the Gulf of Mexico continues to be one of the greatest environmental tragedies of our time. Since 2010, two hundred million gallons of oil have polluted the waters of the Gulf, and though BP claims that the leak has been stopped, the effects of the oil continue to wreak havoc on local marine life. The lush, diverse world of the Gulf Sea and its neighboring marshes has been thrown into chaos and uncertainty due to human greed and hubris. While BP deflects blame and makes only half-hearted attempts at recompense, the effects of the spill will be felt for a long time.

Playwright David Stallings gives a voice to the voiceless victims of the Deepwater spill in his new play, Dark Water, now playing at The Theater at the 14th Street Y. This uncompromising fable looks at the events of the disaster from the eyes of the fish, turtles, birds and other marine life directly affected by it.

The hero of this tale is Barnacle (Diánna Martin), an ancient sea turtle who has in the past survived “dark water”: the burning, gill-choking sludge for which humans seem to hunger. During the events of the Deepwater spill, Barnacle journeys to find her recent hatchlings and save them from the relentless fury of this dark force. With the help of her brash son, Weed (Chester Poon), and a friendly dolphin named Daedalus (Antonio Miniño), Barnacle traverses a landscape thrown into chaos and cruelty.

I was afraid that the trope of using talking animals as characters could have come off as hokey, but Stallings avoids Disney-like conventions of anthropomorphism by giving his characters extremely high stakes and relatable human traits. These creatures feel deep love, quaking fear, and fiery rage as they struggle to survive. Stallings’ verse -- fluid, poetic, and so musical characters often do break into song -- gives Gulf sea life a magical quality, while the specter of death and disaster grounds the show in encroaching terror.

Director Heather Cohn is up to the challenges presented by Dark Water. She stages incredibly emotional scenes with sensitivity and respect. She approaches the material with Shakespearean seriousness. The environment a haunting aesthetic though touches of lyrical dance (beautifully choreographed by Stephanie Willing) and the ropes of cassette tape that represent the oil.

Barnacle is the driving force of Dark Water, and its heart. Her journey changes and challenges her. As she faces threats of predators (most notably Brian Silliman as sneering villainous gull Gullet) and a community of sea creatures adopting the worst traits of mankind, Barnacle must also face the unseen forces that chip away at her sense of empathy. Her tough turtle shell cannot protect what attacks her soul.

A diverse cast of ten brings the ocean landscape to vivid life with their portrayals of the various Gulf fauna. As Weed, Poon is boyish and reckless, but charming in his naivety. Erica Lauren McLaughlin as Foam, another turtle who has suffered much in her young life, ably meets him. Miniño cuts an amiable figure as Daedalus, and Emily Hartford also shines in dance-like turn as a prophetic sea urchin.

As for brave Barnacle’s enemies, Susan G. Bob strikes a haunting, wraith-like figure as an old fish warped by need and circumstance. Stephen Conrad Moore and Lily Drexler give Act Two a pop of pizazz as a con-artist duo of a snake and crocodile, while Kathleen O’Neill is appropriately diva-like as a haughty heron. Silliman’s Gullet, though, out-evils them all. Like most great villains, Gullet is as entertaining as he is loathsome, and Silliman has a lot of fun playing the sneering, sadistic bird.

It is Martin who runs away with the show, though, giving a heartbreaking performance as the formidable Barnacle. She gives the maternal beast a weight to her movements that vividly encapsulates Barnacle’s long-lived and suffered life. She anchors the show with with the determination, warmth, bravery and grief that only a loving mother can experience.

The design team of Dark Water creates a diverse, accessible undersea world. The lighting of Daniel Gallager and sound by Janie Bullard in particular paint an immersive portrait of sea life and the creeping terror that threatens it. The sets and costumes have a rustic, ramshackle charm which scenic designer Will Lowry and costume designer David Withrow have crafted with the play’s concerns in mind. Props and sets were constructed from found or repurposed materials and costumes were stitched from organic materials. Dark Water, with its environmental message, puts its money where its mouth is by embracing sustainable practices, which will hopefully inspire other theater companies to follow suit.

There is no happy ending to Dark Water, but it is not without hope. The lone human character, Daedalus' beloved Blue (a shadow puppet designed by Hartford) looks on at the blackening sea in despair while taking pictures of the devastation (real images of sea creatures choked by oil flash in projection). Not all human beings are monsters, Dark Water tells us. Though our actions have brought destruction we also possess the means to change things for the better. Let us hope that we do, and that Dark Water will be the last play that has to be written on this subject.