Text by Eugene O’Neill; Adapted and Directed by Christopher Loar
Produced by the New York Neo-Futurists

Off Off Broadway, New Play
Runs through 5.11.14
Theater for the New City, 155 First Avenue 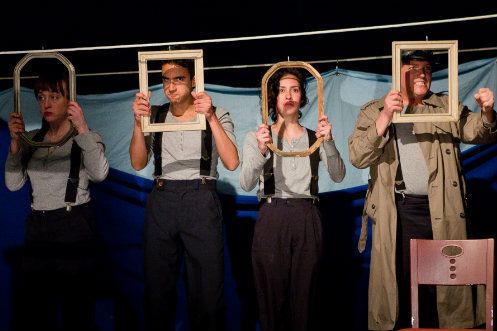 BOTTOM LINE: A clever illustration of the fallibility of language using only Eugene O’Neill’s stage directions as narration and inspiration.

The opening pages of Eugene O’Neill’s 1913 play Recklessness are, of course, stage directions. The notoriously finicky playwright filled his body of work with some of the most precise instructions in the canon, and for the last century, actors and directors have been approaching them with as much bemusement as reverence. One of the opening lines of Recklessness reads “A table stands in the center of the room. On it are several magazines and books, an ash receiver, cigar box, etc.”

It’s in that et cetera that the NY Neo-Futurists, New York’s foremost devised theater group, craft a spectacularly unique theatrical experience. The Complete & Condensed Stage Directions of Eugene O’Neill, Vol. 2 begins with a narrator speaking that line, as performers bustle about the stage assembling the set according to the descriptions. An actor tosses several magazines, books, an ash receiver, and a cigar box onto the table. And on “et cetera,” she drops a toy flamingo.

Such is the inventive nature of this sprightly troupe of oddballs. The New York Neo-Futurists have built a reputation as the underground scene’s most buzzworthy thespians, inviting audiences to challenge and rethink the confines of theater within their peculiar playgrounds of postmodernism. Too Much Light Makes the Baby Go Blind is never the same show from week to week, and once, during a production of Soft Hydraulics, this reviewer was summoned onstage to act out an entire scene. (If you prefer an impenetrable fourth wall in your theater-watching experience, sit near the back.)

As its title implies, The Complete & Condensed Stage Directions of Eugene O’Neill, Vol. 2 is a sequel. Christopher Loar, who helmed the 2012 installment, continues here to draw from O’Neill’s lesser-known works and use only the lines between dialogue as text. As a narrator (Cecil Baldwin) dictates every action occurring onstage, the four other cast members flit about the space, howling with agony or grinning menacingly when the script requires it. The effect somehow never ceases to delight.

In seeing corporeal interpretations of each individual stage direction - often of each word - we witness the fundamental task of the actor. Line readings, after all, can stretch as far as the imagination of the player, yet no further than the parameters of the playwright. In other words, any wacky physical iteration of a description here is fair game as long as O’Neill isn’t rolling over in his grave.

Admittedly, he probably is. He surely never imagined his naturalistic dramas to be stripped of their dialogue, let alone two actors in ill-fitting wigs interpreting the line “The two little girls depart slowly for bed” as an opportunity to walk offstage in excruciating slow motion (the most sidesplittingly funny moment in a production full of them).

Each of the four players excel at piecing together distinct, hilarious characters in response to the narration. Costumes, props, and a recurring gag involving generously-applied blush help these distinctions, but body language remains their greatest tool. The best example of this is probably Cara Francis, who contorts her face this way and that to transform each of her roles into manic cartoons, the uncanny stage incarnations of the author’s visions. Not only does she choose to have Mrs. Knapp in Warnings frantically count “the thousands of worries of a penny-pinching existence” on her fingers, she does so in every single available moment in the scene.

The commitment level of this cast is exemplary. Dylan Marron has an impressively insane fight with himself, darting hysterically in and out of a blond wig, while Christopher Borg and Roberta Colindrez imbue the haunting final story, The Sniper, with anguished stillness. Often performers continue to execute their prescribed action long after the narrator has moved onto other details, resulting in a kind of temporal mishmash of continuous and interrupted action.

It’s a bizarre and unforgettable night at the theater. With each cheeky interpretation of the source material, The Complete & Condensed Stage Directions of Eugene O’Neill, Vol. 2 seems to erode the trustworthiness of diction itself, like a gear steadily being stripped. That this production illustrates the failure of language using only the words of a man striving for impeccable precision of meaning is a truly wonderful irony.

(The Complete & Condensed Stage Directions of Eugene O’Neill, Vol. 2 plays at Theater for the New City at 155 First Avenue through May 11, 2014. Performances are Mondays and Wednesdays through Saturdays at 8 PM and Sundays at 3 PM. Tickets are $25 and are available at smarttix.com or 212-254-1109. For more info visit http://www.nyneofuturists.org/)