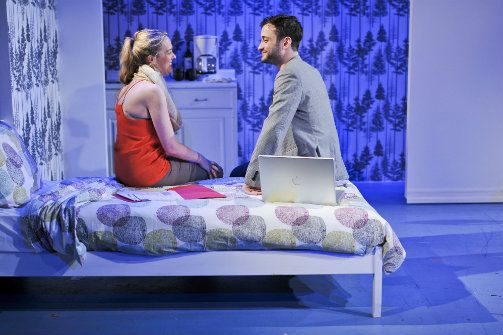 Polly Lee and Teddy Bergman in The Cloud. Photo by Jenny Anderson.

BOTTOM LINE:  A new comedy with a decidedly deeper slant.

If you’re anything like me, sometimes you just don’t want to talk to anyone. In fact, I haven’t answered a phone call since high school, I email my roommates from the next room, and the people I love get gifts in the mail along with the sweetest of birthday texts. Now if I could only use my phone to ask that dude at table eleven if he wants a third glass of chardonnay my non-verbal existence would be nearly complete. So strong is my conversational anxiety that I prefer to see shows alone, rather than take the risk that my date may have opinions to share following the performance. The characters in Matt Moses’s spunky new play, The Cloud, are to varying degrees afflicted by a similar dependency on digital modes of communication. In this case however the topics at hand are a bit more loaded than whose turn it is to buy dish soap. Love is in the air, along with loneliness, lust, jealousy, and enough double entendres that I began to wonder if the usher telling me to, “sit wherever I like,” meant something else all together.

Though The Cloud is billed as a farce, and there are certainly many LOL moments, at heart it is a slightly serious exploration of privacy and social boundaries both on and off-line. On paper the plot reads like a fairly run-of-the-mill Rom-Com, but comes off as fresh and innovative due largely to Mr. Moses’s knack for intelligent, realistic dialogue and Wes Grantom’s clever well-paced direction. To be clear, there are enough penis jokes, awkward pauses, and clumsy straight male behaviors to satisfy, but the true delight lies in the play’s ability to warrant unexpected personal reflection.

The four-person cast seems incredibly at home in each other’s company, handling the intimate aspects of the script and staging without a hint of awkwardness. I found myself particularly drawn to Polly Lee as the more mature yet excitable college costume professor. Ms. Lee has a warm stage presence and her natural comedic delivery tends to rub off on her scene partners, much to their benefit. Teddy Bergman, Mikaela Feely-Lehmann, and Ryan King round out the cast, each equally adept at handling the script’s farcical aspects while taking care to give their characters a more honest emotional life.

Then there are the technical elements, which had me at hello in the form of a blissfully silent theater (pre-show music is highly overrated). With a set designed by Daniel Zimmerman, costumes by Lisa Loen, lighting by Driscoll Otto, and sound design by Josh Millican, the team has created a world for The Cloud that is staggeringly cohesive. There isn’t much I like more than a well-choreographed scene change and DTM (Dyed To Match) design elements. Here the books match the throw pillows, which complement the actress’s shoes, which go perfectly with the wallpaper, that looks amazing in the lights, that flicker like a new text message along with a soundscape of pleasantly melodic audible symbols of digital connectivity. It all collides to form an oddly serene, idyllic, slightly sterile environment that seems to serve as a representation of our often hyper-organized electronic lives. Which in turn is a perfect contrast to the inherent messiness and unpredictability of human relationships.

Though I’m a huge believer in an obscure and ever shifting password, when it comes to my privacy I largely prefer to go about my technology-dependent existence in a state of blissful ignorance. Yet every so often my online life will collide with my real life, forcing me to take stock of what I’m putting out into the world and who is receiving it. Like accidentally sexting your sister at four a.m., The Cloud is a funny, and highly more enjoyable, reminder that when it comes to virtual communication, personal boundaries, and protecting one’s privacy, it’s best to check yourself before you wreck yourself.