$15 for students (subject to availability) 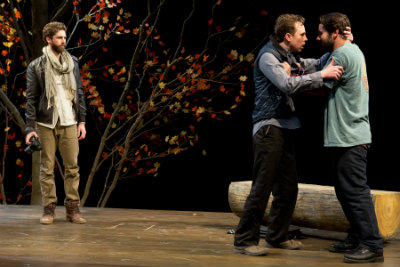 BOTTOM LINE: A tense but unsatisfying exploration of childhood trauma and the bonds of brotherhood.

The Clearing, a new play by Jerome Fellowship recipient Jake Jeppson, falls in line with the kinds of 20th-century American family dramas that enjoy dragging skeletons out of closets. Its story centers on a terrible secret kept by two brothers, Les and Chris Ellis (Brian McManamon and Brian P. Murphy, respectively), bound to each other by shared trauma and the difficult co-dependence such trauma wrought. Nearly two decades later, Les introduces his handsome boyfriend Peter (Gene Gallerano) to his brother and mother, disrupting their tight-knit bond in all kinds of unforeseen ways.

As this story’s singular skeleton is dragged inch by inch out of its closet, the inevitable revelation becomes the de facto explanation for most of Les and Chris’ actions. But in order to rest all the plot’s weight on such an event, the characters and their relationships must be built upon firm emotional ground. In creating these two dramatically different brothers, Jeppson risks planting too many obstacles between the audience and their crucial bond. Les (Brian McManamon) is so closed-off he comes off as subdued, while the extroverted Chris (Brian P. Murphy) is prone to possessive and unpredictable behavior. Everything about their coping techniques -- from returning constantly to the scene of the incident, to literally arguing about the existence of ghosts -- feels disconcerting, if not downright dangerous. Give me messed up characters, but please, let me relate to them!

Luckily, Les undergoes the kind of coming-of-age love story audiences can ooh and aah at. Peter, the free-spirited boyfriend, chips away at Les’ walls, sometimes to no avail. Their scenes together are full of fragility and reluctant grins. But at one point Les provides a painfully accurate self-diagnosis that sums up his character in Jeppson’s typically on-the-nose manner: “I’m boring.” The line is delivered in monotone, with a slight shrug. If there are tantalizing layers to peel off this protagonist, McManamon hasn’t found them. Chris, the manic yin to Les’ yang, has the opposite problem. Murphy’s rhythms and objectives fluctuate so alarmingly from scene to scene, we are left with a composite sketch of a schizophrenic bully who suffers from (as Chris himself puts it!) “arrested development.” That the play ends with Chris doing something unthinkably inhumane and then turning to offer his brother a friendship bracelet, is all the more alienating.

Director Josh Hecht uses subtle touches of surrealism and suspense to focus this story into something consistently haunting: graceful backwards choreography, wisps of poignant music, a reflective narrator who addresses the audience piercingly. Daniel Zimmerman’s set features a refreshing amount of real (or very real-looking) autumn foliage, evoking that sad and beautiful season with stark, vibrant colors. The lighting, by Gertjan Houben, enables a seamless transformation of indoor and outdoor spaces as the story takes us backward, then forward again. The direction and design in general help reconcile what feels like two pairs of characters: the brothers, trapped in a vortex of clinginess and sheer stress, and the two more compelling supporting characters. Allison Daugherty plays their mother Ella, and her performance is a treat; she lends a practical middle-aged woman glimmers of deep exasperation we can't possibly begin to fathom. As the artistic boyfriend who steps dubiously between the brothers, Gallerano has a natural charisma that takes The Clearing to a more tenderhearted place.

The big scene between the two, in which Peter photographs Ella, astonishes completely. Not only is it intensely brave for an actor to methodically remove all her clothing, it is remarkable that she can convey both her character’s vulnerability and nerve. As Daugherty covers herself with her hands, determinedly reciting stories, Gallerano circles wordlessly, snapping sporadic photos and listening with all his heart. If Jeppson’s goal is to shed light on the power of shared experience, and the courage inherent in basic trust, this arresting exchange between photographer and subject pulls it off. It’s a tour de force scene that, frankly, feels out of place in the rest of this puzzling, overcooked tragedy.

(The Clearing plays at the Theatre at St. Clements, 423 West 46th Street, through February 9, 2014. Performances are Tuesdays through Saturdays at 8PM, and Sundays at 3PM. Tickets are $49.50 and can be purchased online at TheClearingPlayNYC.com or by calling 1-866-811-4111. A limited amount of $15 student rush tickets are available at the box office before each performance. For more information, visit TheClearingPlayNYC.com.)