Directed and Conceived by Theodora Skipitares 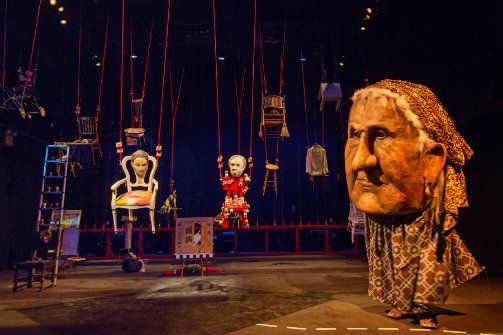 The Chairs. Photo by Richard Termine.

Eugene Ionesco’s The Chairs, that curious manifesto of absurdist theater, may seem ripe for reexamination in today’s world of digital miscommunication. Vaguely apocalyptic and resolutely anticlimactic, it tells the story of an elderly couple assembling chairs and greeting invisible guests in preparation for a grand oration that never occurs. Written in the wake of WWII, it is generally interpreted as an attempt to fathom the unfathomable, a tragic farce in the wake of incalculable, unutterable despair.

La MaMa Experimental Theatre’s current production, conceived by Theodora Skipitares and now playing at the Ellen Stewart Theatre, capably channels the original text’s surreal qualities. A ten foot-tall mask of an old woman, under which an actor sways and bobs, hosts this strange reception, as Judith Malina provides its warbling voiceover. Her pre-recorded face, projected onto a circular screen stage right, is the first of many we see, as the guests materialize to deliver snippets of monologue.

Yes, unlike Ionesco’s arrivals, these are neither silent nor invisible. With the help of several stagehands-cum-puppeteers, and the chameleonic voices of two actors, a succession of chairs enter, each a visually evocative puppet of actual people in history. From Malala Yousafzai to the members of Pussy Riot, the ensemble is a somewhat arbitrary slice of society rendered as elaborately designed pieces of furniture. Ever wondered what a chair version of Yoko Ono might look like? Skipitares has.

The chairs themselves are a series of surprising, often dazzling innovations. As Ai Wei Wei speaks, a simple stool becomes an elaborate shadow puppetry display, and Stephen Hawking’s chair, which marvels at astronomic discovery, unravels into celestial ropes of quivering light. Perhaps most impressive is Nelson Mandela’s intricately structured throne, a storytelling device as well as a gilded sight to behold. Set designer Donald Eastman miniaturizes these fragmented perspectives with equal parts clarity and novelty.

But if these demographic snapshots are meant to provoke moral outrage or intellectual debate, as they sometimes appear inclined to do, the concept falls flat. It is not enough to listen to a forensic scientist on the U.S.-Mexico border for two minutes. Without consequences or follow-up, her story amounts to little more than one in a series of blips, touching on issues of immigration and identity without truly unearthing them. Skipitares’ many degrees of separation between audience and story -- the showy theatrics of the chairs, the combination of sound bytes and vocal puppetry -- alienate rather than involve the audience. The only scene delivered unfiltered is a presumably autobiographical story told by a live actor, providing the production one of its few resonant moments.

Plodding transitions don’t help. Accompanied by Sxip Shirey’s music, which often sounds like wind chimes clanging down a flight of stairs, each introduction to a new guest consists of an awkward pause amid Jeff Nash’s conspicuous lighting adjustments. The recorded songs are baffling, too, given the presence of co-composer Alice Tolan-Mee, who coaxes fascinating sounds out of a cello, keyboard, and, it turns out later, her beautiful voice. If this show’s aural landscape is meant to be as disarmingly varied as its characters, why sideline the live musician? These segues exist presumably to allow the ideas of the previous speech to simmer. The audience is more likely wondering if any of these soliloquies will congeal into something, anything, significant. Another chair enters, another voiceover begins, and finding an overall pattern starts to become a chore.

Although mostly tethered to this simplistic structure, the piece later expresses mild interest in expanding and distorting its world. When Gertrude Stein and Eugene Ionesco himself convene to have a singsongy conversation -- a contrivance as bizarre as it sounds -- it presents a welcome twist, and worth teasing out. But this deviation belongs, alas, in the context of another production entirely. Perhaps one interested in more than just surface-level political and emotional scrutiny.