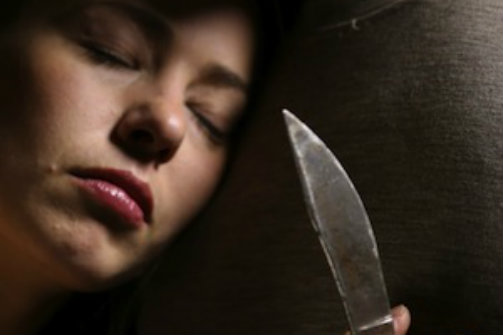 Part macabre mashup, part comedic send up, Come Thick Night is predominantly a gruesome retelling of Macbeth, wherein the Thane of Cawdor is a woman obsessed with killing her own father. Sexual undertones and hints of sexual violence pepper the story, leading the audience to sinister and compelling assumptions about our heroine’s motives for offing Dad. Yet in this play, our Macbeth stand-in is caught on repeat, reliving the same murder over and over (a clear and gripping mirror-image of the original Macbeth, who seems to be caught in an eternal loop of violence himself).

The piece works best due to the fine acting from the two leads—Laura Tratnik and Niels Bormann—who jump fearlessly into a harsh verbal and emotional landscape, and fill it with a simple honesty. It’s that quality that makes the play work, and gives gravitas to the sometimes absurd actions of the story.

The severe simplicity of the set, although intriguing, never feels stylized enough. It is as if the choices were not fully intended (why they are in a pop-up tent, I’m not sure). And though the world of the play is certainly striking, I do wish that some of the stylistic choices were starker and more brutal. For example, harsher lighting shifts would have made the sharp transitions between reality and dreams much clearer. Maybe the point Come Thick NIght is trying to make is to highlight the lucidity of dreams and the mush-like line between thought and reality. But instead, it comes across as simply muddled.

Still, the ideas behind John Crutchfield's play are both lovely and haunting, and you certainly leave struck by the image of a woman caught in limbo, butchering her father over and over for reasons left mostly unsaid. For these ideas alone, Come Thick Night is gripping.

(Come Thick Night plays at 64E4 UNDERGROUND, 64 East 4th Street, through August 24, 2014. Remaining performances are Saturday 8/23 at 7PM and Sunday 8/24 at 2PM. Tickets are $18 and are available at fringenyc.org. For more show info visit www.johncrutchfield.com.)