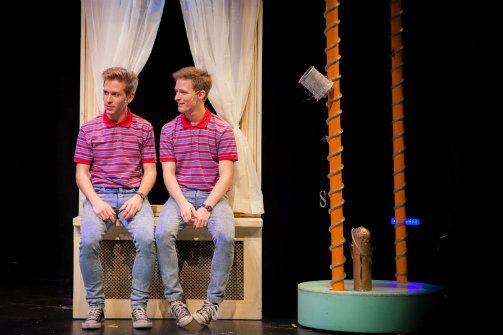 BOTTOM LINE: The laughs are abundant in this new musical.

Set in the early '90s, Cloned! tells the story of Wally (Alex Goley, basically standing in for Michael J. Fox) a cocky young scientist set on inventing the world's first teleportation machine. After many futile attempts he lands on an old equation first documented in the journal of a mysterious dead inventor (Babs Winn). Given to him by his dorky love-struck assistant Izzy (Melanie Beck), these notes lead Wally to discover Particle S, which seems to be the missing link he has been searching for. After first testing his machine on his pet bird Tramell (David Andino), it becomes clear to all involved that the machine in question is actually a cloning device that has not only duplicated Tramell, but also given birth to Clone Wally (Eric Mann) and clone Izzy. With the help of his stoner roommate Fizz (Matthew Knowland, who is living for this material) and a movie star by the name of Sharon (a show-stealing Crystal Kellogg), Wally and gang manage to outsmart the bad guys (Tony Romero and John Alban Coughlan) who plan to give the invention to the North Korean government. With slamming doors, mistaken identities, sexual innuendos, and enough absurd plot twists to keep the audience, or at the least the characters, on their toes, Cloned! is a traditional madcap farce that just happens to be a musical.

With a book by Jacey Powers and Dan Wolpow (who also provides the lyrics) the show reads like a mash-up of Little Shop of Horrors, Disaster!, Avenue Q, and Lend Me a Tenor. It's funny, oftentimes swinging for the lowest possible joke and hitting it out of the park. The stock characters are all recognizable, but each are given enough quirks and are drawn from such a wide spectrum of sources that when thrown together the relationships have the power to surprise. Like many a farce before it, it's all explained at the end during an "all cast on stage moment" that is heavy on exposition, jam-packed with stage crosses, and succeeds at clarifying very little. Luckily there's comedy in the confusion and even if the show isn't as smart as its predecessors, the laughs are just as frequent.

As much as the book scores with the humor, the score itself (music by Adam Spiegel) isn't a home run. Though tuneful, it lacks a cohesive sound. Where the book and production stay fairly true to the '90s, the songs are too general to be pastiche or parody and at the same time sound too old-timey to be considered modern musical theatre or pop. As for the lyrics, they rhyme when they want, but mostly have a mind of their own.

Director Tom Wojtunik and choreographer Ryan Kasprzak have combed the material for every morsel of humor to be had and nearly every moment lands. The staging is often very clever, the duet numbers in particular have been given a marvelous treatment by Mr. Kasprzak, and both are aided greatly by the comedically adept cast. Perhaps Cloned! may not prove to be the most original piece at this year's NYMF, but if we're going strictly by audience response and laughs per minute then it's bound to be a standout.