Christmas with the Crawfords

Created and Produced by Richard Winchester 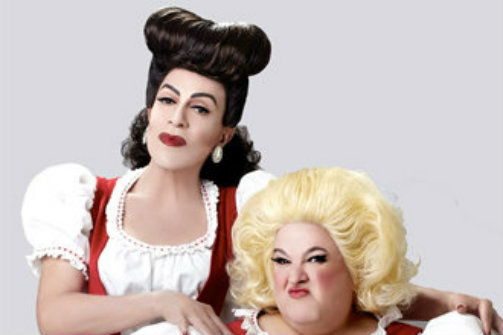 Joey Arias and Chris March as Joan and Christina Crawford.

BOTTOM LINE: Christmas with the Crawfords is a campy good time, but it’s not a riotous knee-slapper.

The show starts in Joan Crawford’s living room in Brentwood, CA in 1944. The family is preparing for their Christmas Eve radio broadcast (the real Crawford Christmas radio show happened in 1949 and some of the show’s text is lifted directly from that). We meet a sassy “Christina” played by Chris March (who also designed the costumes), a spunky “Christopher” played by the energetic Adam Davidson, and mommy dearest “Joan” played by Joey Arias.

As the family prepares, their home is inundated with stars of the golden age of Hollywood like Gloria Swanson and Judy Garland. These surprise guests have gotten lost on their way to Gary Cooper’s Christmas party and have wound up at neighbor Joan Crawford’s home. Joan doesn’t like the competition one bit, and while she tries to remain lady-like through most of the show, her inner bitch-mom-from-hell comes raging out eventually and she winds up running around the stage trying to beat her children. It's good stuff.

Joey Arias looked amazing, (and man can she handle her high heels), but I think on the whole, Arias’ performance falls a bit flat. I couldn’t understand most of her lines, but Arias does some really wonderful non-verbal work so I will deign to call her the mistress of mugging. Most of the ensemble members are double cast and play multiple roles which include elastic-faced Jason B. Schmidt as “Gloria Swanson” and “Patty Andrews”; super pretty and true triple-threat Brett-Marco Glauser as “Carmen Miranda” and “Maxene Andres”; and the formidable Sherry Vine as “Baby Jane Hudson” and “Hedda Hopper”. The two ensemble members that play only one role play them with absolute perfection. Connie Champagne brings Judy Garland back to life, and the show-stopping number of the night  belongs to Flotilla DeBarge, who plays “Hattie McDaniel”.

It's worth going just to see March's glorious costumes, of which my personal favorites were Gloria Swanson's and Joan Crawford's grey-sequined ball gown. Christmas with the Crawfords has many famous diva quotes that the audience can anticipate because there’s an obvious set up for them; on the night I went, the audience would say the line before the performer got a chance to. Sometimes after these extemporaneous shout-outs, the performers broke the fourth wall to respond. I actually would have liked to see more of this, since it adds to the fun and would have acted as a defibrillator, giving the show that extra jolt of energy and presence I think it needs to make the leap from being an enjoyable show to being the hilarious riot it has the ability to become. So while I wished I saw more of the rapier wit and spontaneity that conventional drag performances are known for, the show is fun, laid-back, and an all-around good time.

(Christmas with the Crawfords plays at the Abrons Art Center, 1466 Grand Street, through December 27, 2014. Remaining performances are Sunday December 21st at 7PM, Tuesday December 23rd at 7:30PM, and Friday and Saturday December 26th and 27th at 8PM. Tickets are $45 and are available at abronsartscenter.org.)