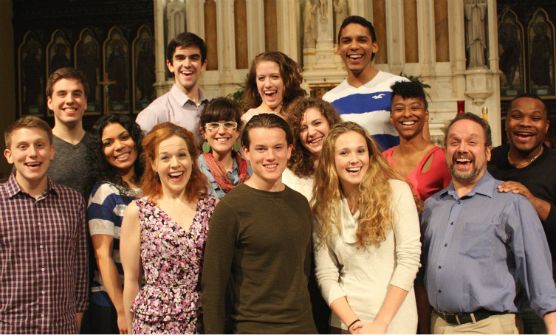 The cast of Candide!. Photo by Judith Jarosz.

BOTTOM LINE: A charming show with a complicated history gets a lovely, stress-free production in Brooklyn.

Candide is a show with a, well, an interesting performance history. It has become a favorite of musical theater and classical music lovers alike, but it took a lot of work to get it to that point. Based on the famous Voltaire satire, Candide originally premiered on Broadway in 1956 with a jaunty score by Leonard Bernstein and a heavy-handed book by Lillian Hellman. Bernstein’s music was instantly embraced. Hellman’s book went over about as well as you would expect. The show flopped, and would have gone the way of many a failed musical were it not for the show’s incandescent music, particularly “Glitter and Be Gay,” the Mount Everest of every classically-trained soprano.

The legendary director Hal Prince would give Candide a second chance at life when he reimagined the show for the Brooklyn Academy of Music in 1973. With a minimalist set, smaller ensemble and new book by Hugh Wheeler, this Candide was successful enough for a Broadway transfer. Candide has continued to be tinkered with ever since, but the Prince/Wheeler version endures and is the blueprint from which most contemporary mountings of Candide spring.

It is that version of Candide that Theater 2020 is presenting this month at St. Charles Borromeo Church in Brooklyn Heights. It is an unambitious but charming production, content to simply be Candide and nothing more.

Director David Fuller takes a stripped down approach to the staging, allowing his very talented ensemble to drive the action and set the scenes. The youthful cast tackles the material with infectious enthusiasm, and this Candide is at its best when it lets the chorus have full reign. The acoustics of St. Charles reinforces the ensemble's vocal talents. The Candide chorus blends seamlessly and is more than up to the challenges presented by Bernstein’s score. The finale was so stirring, the hairs on my neck actually stood.

The effectiveness of the chorus was probably due in no small part to the work of music director Ming Aldrich-Gan. Aldrich-Gan deserves special mention, not just for leading a fine ensemble but also for accompanying the entire production by himself. To play through just the overture of Candide on piano would be trying for any musician, but Aldrich-Gan’s technical finesse and boundless energy gets him through the entire score of the show with nary a misstep. The man deserves some sort of award or at the very least a free Gatorade after every show.

Of the leading actors, Greg Horton owns the show by gamely tackling the multiple roles of Voltaire, Dr. Pangloss and others. Ryan Farnsworth is charming as the painfully earnest title character, while Hallie Brevetti and Lorrine Lampert bring an earthy zest to their turns as Paquette and The Old Lady, respectively. And then there is Cunegonde. Oof, Cunegonde. Cunegonde is a difficult role; it requires an actress with strong comedic chops who also happens to possess a soprano voice of extraordinary range. It’s a tall order for any performer and if Ellie Bensinger does not quite fill it, well, she does her best. Bensinger is a delightful actor and singer, but her rendition of the character’s famous aria, “Glitter and Be Gay,” is underwhelming. She eschews the song’s “money notes” for less challenging material, which kind of robs the song of its charm. Listening to a performance of “Glitter and Be Gay” without the high E-flats is like watching an ice-skating routine without a triple axel. It’s nice, it’s pretty, but it could be so much more.

This production of Candide is worth a visit, especially if you have never experienced the show. It is an accessible way to enjoy one of the most pleasurable musicals of the past century.

(Candide plays at St. Charles Borromeo Church, 19 Sidney Place, Brooklyn, now through March 9, 2014. Performances run on Fridays and Saturdays at 8 PM and Sundays at 3 PM. Tickets are $18 and are available at brownpapertickets.com)