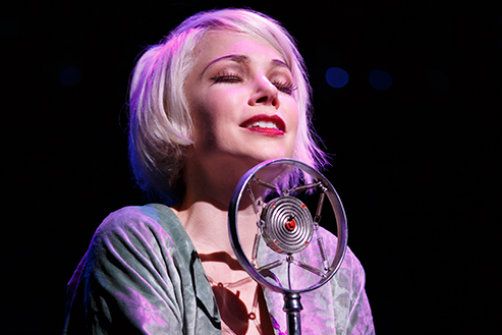 BOTTOM LINE: A direct revival of the 1998 Broadway run that lacks freshness and originality.

Have you ever heard a cover of a song and thought to yourself, “this is really close to the original, except not as good, not as... genuine”? I often wonder: what is the point of covering a song if you’re not going to infuse it with something all your own, shed new light on its meaning, change the tone, look at it through a different lens, do something, anything to make it feel fresh? Roundabout Theatre Company’s current revival of Cabaret is like a cover that’s a little too close to its predecessor. In fact, it’s really a resurrection of the 1998 Broadway revival, right down to its director (Sam Mendes), co-director/choreographer (Rob Marshall), its entire design team, and its star Alan Cumming, who is reprising his legendary role as the Emcee.

Now, if you’ve spent the last ten years kicking yourself for missing that production, here’s your chance! From what I can tell (I never saw the 1998 revival, but there’s YouTube), it’s the same set (Robert Brill), the same costumes (William Ivey Long), the same choreography--the same show! If, however, you want to experience the raw energy of Broadway theatre, look elsewhere, as Cabaret feels like it’s dragging its decade-old boots; a show that should be sizzling with the energy of sex, drugs, and political turmoil feels, well, pretty tired.

The cast isn’t without its gems. Linda Emond as Fräulein Schneider, the older woman who runs a boarding house of kooky characters, strikes a balance of gentleness and strength that makes her character the center of audience sympathy. Danny Burnstein as her boarder-turned-lover, Herr Schultz, is also rather good. And then there’s Michelle Williams, who’s making her Broadway debut as Sally Bowles. There’s been a lot of speculation in the theatre world about how this will go. She’s a three-time Academy Award nominee, but that’s for film, and just look to the last decade’s Hollywood musicals to see how badly casting famous movie stars in musicals can go. Sweeney Todd with Johnny Depp and Helena Bonham Carter, both fine actors, is just the worst if you ask me.

Williams doesn’t totally wow here, but she certainly doesn’t flop. Like most people, it’s hard for me to watch someone play Sally Bowles without thinking of Liza Minnelli. Liza kind of ruined that role for anyone else by nailing it so hard in Bob Fosse’s 1972 film version and it’s a lot to live up to. While Williams’ Sally in some ways rings of Minnelli’s--particularly in that rounded-shoulder posture that somehow betrays through body language the desperation she would never show otherwise--she also makes Sally her own: blonde and cockney and a little less smooth than Liza’s.

Her musical performances? Hit or miss, I say. Her early numbers (“Don’t Tell Mama” and “Mein Herr”) bring life and momentum to the first few scenes as she sings and dances, not missing a step, with the chorus. “Maybe This Time” I found rather flat, but “Cabaret,” obviously a crucial moment, was outright chilling. The energy she brings to these moments is lacking in much of the rest of the show, however, and dreadfully lacking in the show's middle third or so.

As I sat at my “cabaret-style” table sipping my $3 souvenir cup of tap water (you have to buy the cup to have the water; I later learned from a kindly waiter that there’s one water fountain hidden near the front lobby restrooms), I couldn’t help but feel like what I was watching was a vanity project, timed right after Cummings’ acclaimed Broadway rebound with Macbeth, that was built to sell tickets and not to accomplish anything genuine or significant. It wasn’t lost on me that, just down the street, it was rumored that Neil Patrick Harris was reinventing Hedwig (also of 1998 fame) with enough electricity to revive Frankenstein’s monster. A longstanding commandment of Broadway is “give ‘em something new!” Hedwig can claim that, but Cabaret doesn’t even try.