Written and Performed by Joe Assadourian; Directed by Richard Hoehler 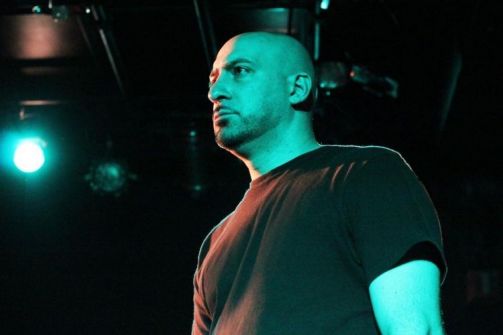 Joe Assadourian in THE BULLPEN. Photo by Ben Mann.

BOTTOM LINE:  A hilarious one-man play that takes you through a wild ride into the “other” side of the New York City courthouse.

We arrive at the courthouse’s bullpen. It is not the ordinary courthouse that we know. The bullpen is the temporary holding cell for prisoners waiting for their trials. Joe Assadourian recalls the time he spent there, bringing alive amusing caricatures of the people he met inside and outside the bullpen. In this play, which he wrote and performs, he seamlessly flows from character to character in conversation, from a stoner, a transvestite, a guy from the hood, a guy who speaks English so fast that it sounds like Spanish, to the impaired-speech defense lawyer, an impatient judge, and many more.

Assadourian had never seen a play before writing this one and working with director Richard Hoehler. He was released from prison in 2013 after serving 12 years of a 25 year sentence for attempted murder. Hoehler met Assadourian two years before his release, when Hoehler volunteered in an acting workshop at the Otisville Correctional Institution in upstate New York. Hoehler used acting techniques to guide inmates through the rehabilitation process. Along with two-dozen other inmates, Assadourian reluctantly joined the acting workshop, but quickly discovered his special skills. With Hoehler’s guidance, he created an 8-minute scene that incorporated characters he had met during his incarceration. The Bullpen evolved from that sketch into a full-length production.

The play is a fast-paced, ironic and funny examination on the process of going through a murder trial in which Assadourian claims he is innocent. The majority of the play takes place inside the bullpen, where Assadourian says he had the most memorable as well as hateful memories -- myriad guys crowded into a small space, waiting around with no better place to rest, they would even use their shoes as a pillow. Since his cellmates have nothing better to do, and a few of them have experiences being in court for more than one occasion, in this play, they decide to put Assadourian on a mock trial. In between scenes at the bullpen, he makes his appearances at the state’s court. Seen through the eyes of Assadourian, both court experiences were like nothing that I had ever seen or known before, and the plot escalates to a dramatic turn of events. The Bullpen offers a bold, original script and a lively performance that deserves a wide attention!

(The Bullpen plays at The Playroom Theater, 151 West 46th Street, 8th Floor, in an open run. Performances are Tuesdays and Wednesdays at 9PM; and Saturdays at 4PM. Tickets are $20 and are available at web.ovationtix.com)