The Brink of Us 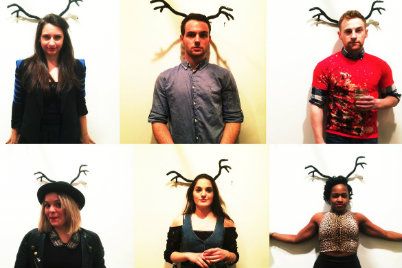 BOTTOM LINE: A surreal, messy look into the lives of old friends. And there are deer.

The Brink of Us is like The Big Chill gone to hell and come back crazy. Playwright Delaney Britt Brewer puts her characters -- mostly white, mostly successful couples -- in Elliot's (Tom Kelsey) cabin for the weekend. The old college friends indulge in drinking, drugs and book games, while trying not to dwell on the apparent suicide of Elliot’s sister, Annie, one year ago. The fact that her death occurred in an adjacent lake does not make anything any better. Elliot, however, has been nursing doubts about Annie’s death and has plans for the group beyond impending hangovers. Soon snow starts to accumulate, the weekend stretches out into weeks, the food runs low, and...something about deer? There are deer, and they are probably a metaphor for something. I have to confess when the press release stated that “the deer are hungry” I hoped that meant the gang would be terrorized by a pack of bloodthirsty deer, because I am kind of an idiot that way.

The Brink of Us offers an intriguing mashing of genres that does not quite deliver in its execution. All theater requires some suspension of disbelief but The Brink of Us asks its audience to toss disbelief in the air and watch it fly. Why would these characters choose a site marked by tragedy for a booze and coke-fueled getaway? Why didn’t anybody check the Weather Channel for impending snowstorms? And why did anybody remain friends with creepy Elliot, especially when it is implied that nobody really seemed fond of his Manic Pixie Nightmare Girl of a sister?

What really screws The Brink of Us, though, is its venue, The Great Room at Oxford Space. It is a handsome room, and its rich wooden walls and singed fireplace perfectly suggest an elegant but neglected cabin in the woods. Seating the audience in the round also seems like a smart way to capture the claustrophobic nature of the play. However, the space itself stretches awkwardly in a rectangular shape that forces the actors into odd compositions throughout the room, and when the actors snort cocaine it is clear to a casual observer that they are just pushing powder around a mirror. Putting The Brink of Us in a tight setting might have looked good on paper, but I think the show would have benefited from more traditional proscenium theater.

Puzzlingly, director Kara-Lynn Vaeni encourages her actors to be as big as possible all the time. That direction makes sense for the play’s crazy climax when all hell breaks lose, but in the beginning it feels out of place.

I feel bad dumping on The Brink of Us, as there is clearly talent bubbling beneath the surface. Vaeni has had an interesting career already, based on her program biography, and I was intrigued by many of the members of the cast. Annelise Nielsen is an expressive performer with a strong sense of physicality and a potent emotional life. Peter Staley is bullet of an actor who rips through his scenes with powder-keg energy. Linda Tardif sparkled in her brief appearance as Elliot’s dead sister. I have no doubt that the young artists involved in The Brink of Us will find their success somewhere down the line no matter what jerks like me have to say about it.

(The Brink of Us plays at The Great Room at The Oxford Space, 138 South Oxford Space, Brooklyn, now through May 17th.  Performances are Fridays through Saturdays at 8PM; and Thursday, May 15th at 8 PM. Tickets are $20 or $18 with a student ID and are available at brownpapertickets.com.)