Between Riverside and Crazy 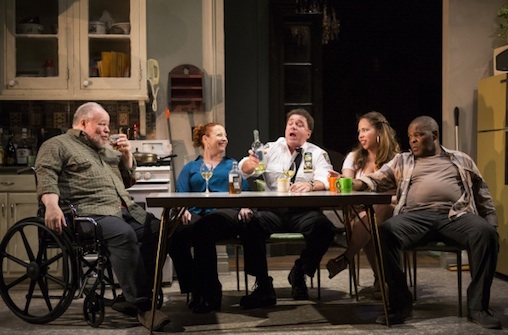 So says Walter "Pops" Washington, the besieged patriarch at the center of Stephen Adly Guirgis' absorbing new play Between Riverside and Crazy, now playing at the Linda Gross Theater. Walter is played by the great Stephen McKinley Henderson, whose performance is so good it's difficult to imagine anyone else taking on the part of this self-hating, much-maligned former cop. Yet the real star of this show may be the rent-controlled Manhattan apartment to which its title refers.

Walt Spangler's scenic design is a marvel of specificity. From the ratty doormat to the cramped bathroom to the can of Goya beans on the counter, the set evokes the clutter of New York living in an almost unsettlingly real way. Anyone who has paid rent in this city can relate to the pile of pizza boxes in the corner of the kitchen, a cardboard explosion destined sometime soon for recycling. That the accommodations swivel on a revolving stage makes Spangler's attention to detail all the more striking. Director Austin Pendleton has judiciously employed the effect to enhance rather than distract from the story's intimate goings-on.

Walter, who blithely ignores threats from his landlord as he sits drinking in his late wife's wheelchair ("It's comfortable seating!") plays host to an assortment of house guests. They include his paroled son Junior (Ray Anthony Thomas), Junior's brassy young girlfriend Lulu (Rosal Colón), and their friend Oswaldo (Victor Almanzar), a recovering junkie. Former colleague Detective O'Connor (Elizabeth Canavan) and her pragmatic fiancé Lieutenant Caro (Michael Rispoli) arrive to pressure Walter into taking a settlement over a racially charged police incident that ended his career eight years ago. Walter is also visited by an inscrutable Brazilian mystic (the bewitching Liza Colón-Zayas), who claims to be sent from the church, in the play's only descent into surreality.

As one of several characters with daddy issues, Almanzar demonstrates an astonishing range of emotional extremes. The way he munches almonds at the breakfast table is a masterclass in less-is-more acting. Canavan brings grace and poignancy to O'Connor, whose intentions are as murky as the whiskey in Walter's tea. And Henderson carries the story, navigating the deceptions that surround and weigh on Walter with magnificent subtlety.

Guirgis is occasionally spread thin in such a thematically ambitious piece, which encompasses racial tensions, notions of masculinity, ageism, personal and religious redemption, becoming ones parents, fighting that inevitability, and, of course, New York real estate. Walter's fraught relationship with his son in particular lacks depth, resulting in a touching but on-the-nose bedside reconciliation in act two.

But Guirgis so convincingly conveys the melting-pot nature of New York City, so compellingly illuminates the idea that no matter who you are, you do what you must to get by. That Walter tries to get by with some dignity and maybe even a little self-respect intact makes him an everyday sort of hero: a flawed, poker-faced man's man with a stubborn commitment to justice. Watching Henderson embody those values is a treat. See Between Riverside and Crazy for his heartfelt performance, or if you've ever stuffed your cardboard recycling into the corner of your kitchen just so.

(Between Riverside and Crazy plays at the Linda Gross Theater, 336 West 20th Street, through August 23, 2014. Performances are Mondays and Tuesdays at 7PM; Wednesdays at 2PM and 8PM; Thursdays and Fridays at 8PM; and Saturdays at 2PM and 8PM. Tickets are $65, $35 for members, and are available at atlantictheater.org or by calling 212.691.5919. For more info visit atlantictheater.org.