Off Off Broadway, New Play
Runs through 8.16.14
The Players Theatre, 115 MacDougal Street 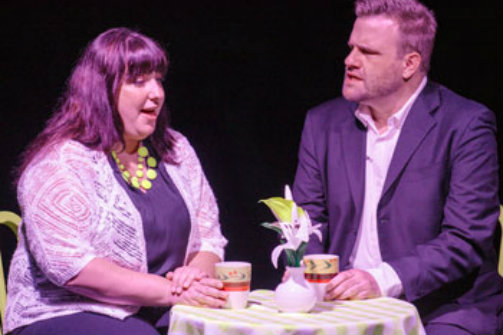 BOTTOM LINE: This play, focusing on a psychotherapist aiding her troubled clients, is both humorous and dramatically compelling thanks to a strong performance from Stephen Wallem and a clever script.

The fact that playwright Judy Heath is actually employed as a psychotherapist when she is not writing plays (Heath and co-writer/husband Thomas won the audience choice award for last year’s Perfectly Normel People) comes as no surprise given the authenticity of the therapy sessions that comprise the majority of Bedroom Secrets. Anyone who has spent any time on a therapist’s couch can see that these sessions bear a greater resemblance to the real thing than the typical dramatizations of fictional therapy.

Psychotherapist Robin (Ashlie Atkinson) counsels her troubled clients, all of whom seem to be struggling with sexual issues. There is a wealthy lawyer who senses a distance from his wife, a 26-year-old woman who seems to be addicted to dating users and losers who she primarily meets on Match.com, a husband struggling with a sex site addiction, a gay architect whose boyfriend keeps pressuring him for a threesome, and a wealthy middle-aged wife who is cheating on her husband with a woman. The catch is that all of the clients are played, rather convincingly, by Stephen Wallem (Thor on Showtime's Nurse Jackie). Amazingly, the chameleon-like Wallem is able to pull off characters of differing ages, genders, and sexual orientations, providing a showcase for his impressive acting chops.

Peppering her sessions are Robin’s own dating excursions, as we see her hesitantly moving forward with her own suitor (also played by Wallem). As she admits to her own hang-ups and pains of the past, we see a parallel between Robin and her clients. While the play moves forward we watch her clients' dramas and issues unfold until they move towards resolutions and the truth, while Robin finds her own chance at love.

Although most of the play is limited in setting to Robin’s office, the play’s story lines remain compelling as we see the characters struggle to stop their self destructive habits and confront those in their lives who are harming them, sometimes facing painful truths. The acting talent of both Atkinson and Wallem make the minimalist set, props, and cast hardly noticeable and maximize the dramatic effect of the play’s surprise twist (not to mention the play's quips and one liners). Wallem in particular is able to provide both comedic relief as well as convincing emotional tension. The Heaths’ script manages to tackle heavy-hitting issues and dramatic moments with authenticity and nuance. Hopefully this unique, well-performed show will have a life past its run in the Fringe Festival; it already received my vote for the Audience Choice Award.