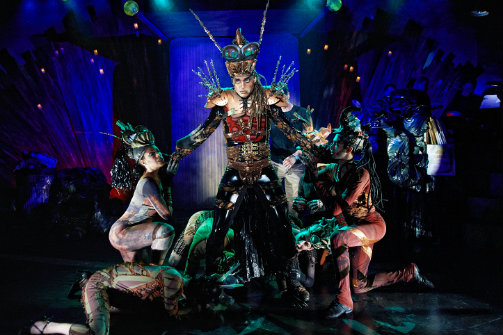 BOTTOM LINE: This campy eighties throwback is the most fun you can have with bedbugs without having to burn the sheets.

Bedbugs are making a comeback. Not that they ever really left, but these days it’s impossible to scroll through Facebook without seeing an article about which NYC subway line is the latest victim of a bedbug infestation. So it’s fitting that Paul Leschen and Fred Sauter’s musical has reemerged under Robert Bartley’s direction, after selling out its extended run at the New York Musical Theatre Festival in 2008, and then again appearing for an off off Broadway run in 2012.

Bedbugs!!! sets its psychotically hilarious tone right off the bat. In a flashback, Carly (Grace McLean) is up past her bedtime watching her favorite singer Dionne Salon on TV. Dionne (Brian Charles Rooney) is a world-famous Canadian star, discovered at age thirteen by her manager slash husband Dexter (Danny Bolero), and obsessed by the Power of Love—sound familiar? Entranced with Dionne’s haunting performance, Carly doesn’t hear her mother (Gretchen Wylder) getting attacked by bedbugs in the next room. The attack leads to a freak accident that kills her mother, which stirs in Carly a lifelong sense of guilt and an irrational hatred of bedbugs and Celine Dion, I mean, Dionne Salon.

Flash forward to the present day. Carly is an adorably awkward exterminator hell-bent on discovering a one time kill-all solution to wipe out the tiny villains responsible for her mother’s death. Her sensitive younger brother Burt (Nicholas Park) is her lab assistant. When Carly reveals her deadly toxin, Burt begs her to reconsider and create a solution with more earth-friendly materials. Carly waves off her little bro’s worries, and the two travel from borough to borough to do some serious exterminating. Overnight, Carly is hailed as The Bug Lady, saving Manhattan one dead bug at a time. That is, until it’s discovered that the creepy crawlers aren’t dead. Not only are they alive, they’re giant. They’re hungry. And they’re super horny.

Enter the Bedbug King, Lord Cimex (Chris Hall), a psychopathic catwalking Bedbug with killer heels. Cimex is seeking a Queen to carry his spawn and rule over their underground lair while he and his army terrorize Manhattan. “This is the next wave of civilization. Dinosaurs. Humans. Bedbugs.” he declares. When Cimex sees Carly on TV, it’s love at first sight. He kidnaps Carly and brainwashes her into loving him, dragging Burt and his trust fund hipster hookup Mason (Barry Shafrin) with them. Ultimately, it’s up to Carly to use her powers as the Bug Lady to save the world...or destroy it.

Admittedly, at times the humor is weak (there’s a lot of easy jokes and generalizations about gentrification and race), and some of the dialogue drags, particularly in the scenes with Dionne and Dexter. But the unique vocals served up by McLean (wailing Rockabilly), Hall (glam punk) and Rooney (pop sopranista) glaze over the show’s faults. Although I can’t promise you won’t exit the theatre feeling the need to compulsively scratch yourself.