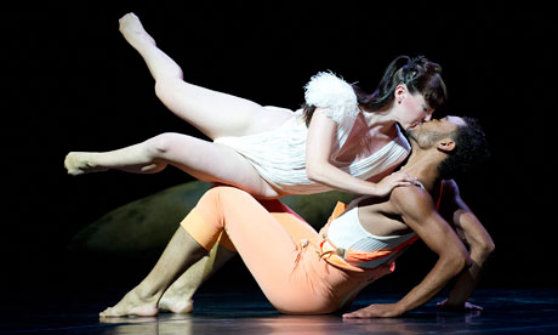 BOTTOM LINE: A beautifully danced and striking version of the Grimm's Snow White tale with Jean Paul Gaultier's racy costumes, and an aerial dance for the dwarves.

This is Angelin Prejlocaj’s version of the classic Grimm’s tale Snow White. It starts in a world of drama spiced with the Mahler symphonies, electronic music by 79D and daring costumes by Jean Paul Gaultier and goes up from there. The only visible difference I saw from the Disney version is that the wicked queen ends by being tortured to death in red hot iron shoes (which look just like a pair of Crocs). There are a lot of stellar elements including an aerial dance by the dwarves, touching duets with Snow White and her prince, and a duet where the queen controls her young, beautiful stepdaughter by the jaw lock of an apple.

In the opening scene, we watch the Snow White's mother die in childbirth and we see her baby taken from her limp arms. In a moment of cleverness by Prejlocaj, the king dances with the baby, slipping behind a panel to reappear with a child and then the swan-like princess (Nagisa Shirai) in a white dress slit completely down the side. Then as we head to the palace to see their court, everything moves as it would in a classical ballet. The 16 ensemble dancers in four lines of four do variations of the same slashed movements of the arms and soft jumps. The men and women take turns dancing quirky phrases and then duets are formed all in a symmetrical kaleidoscope of bodies. Snow White and her prince then meet, but it felt like we were waiting for the big punch line in the wicked, leather sporting queen. She wants to be the most beautiful but her unruly anger and vanity are the two characteristics that rule all her movements, which made the show feel more like “The Real Housewives” than an avant garde dance piece. We don’t learn anything about her inner conflicts or how she got to be such a b#$&ch.

Other wonderful moments include a solo with a topless female "doe" moving in a peculiarly stark, stop motion manner. Her solo was different than everything else seen in the show. It was beautiful without being sweet and I wish her name had been mentioned. Snow White and her prince (Sergio Diaz) dance a duet passionately in silence and then to a Mahler symphony. Why this was so enthralling to see a repeated duet that brought out the choreography and the music in a glorious way is what makes Prejlocaj such a genius.

We are transported into a magical world as the dwarves ricochet and spin in spider-like patterns off a cave wall. They look almost identical -- another difference from the Disney take -- and have a rough and tumble section with Snow White set to a score that is reminiscent of "Freres Jacques." They sit in a circle and clap hands and almost seem to be playing children’s games.

A duet with the queen manipulating Snow White's body by moving the apple is innovative and powerful. Diaz, as her prince, never dances so graciously as he does at the end, sweeping a dead Snow White into his arms, trying to make her come to life. This tragic love duet was so moving and intimate to watch as Shirai still executes all her movement without the use of her vision or limbs. I could hear sniffling in the orchestra area. Miraculously, she is revived.

Angelin’s Snow White was evocative and sexy with the strong main characters, but the group sections in between felt like we were passing time- with some beautiful phrases and energetically charged dancers. The Queen’s villainous role ended without mercy as she danced herself to death, but because we never learned why, we don't really care. The happy couple celebrated their union and Snow White lives happily ever after.

(Ballet Prejlocaj: Snow White plays at David H. Koch Theater, 20 Lincoln Center Plaza, through April 27 2014. Performances are Wednesday and Thursday at 7:30PM; Friday and Saturdays at 8PM; and Saturday and Sunday at 2PM. Tickets are $25-$110 and are available at davidhkochtheater.com or by calling 212.496.0600.)