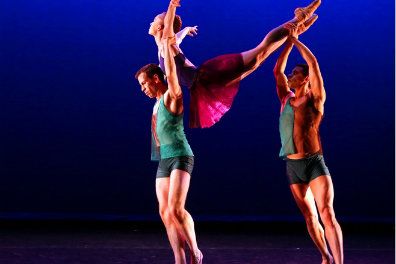 A scene from "Kinderszenen" performed by Ballet NY. Photo by Ruby Washington.

BOTTOM LINE: A confusing evening of dance with varying choreography by emerging artists.

The mission statement of Ballet NY is to offer an environment where emerging choreographers can create new works using accomplished, professional dancers. For someone who has never seen a company performance, this statement tells me that, because the company is meant to foster new talent, much of the work that is being performed might be rough or a work in progress. The promise in payback, however, is that the works might also be astonishing pieces of creativity and concept. I found myself asking questions (How do I feel about the work? Is it what the creators intended?) in this performance more than most. I would say the evening was an unusual instance where, instead of coming away with a resounding yes or no, I came away with a resounding question mark.

The first piece performed was the Company Premiere of “Kinderszenen.” For me, an invaluable aid in understanding any unfamiliar dance piece involves checking your program to see if the company has provided any background or context that can help elicit what we should be looking for in what we are looking at. In this case, the choreographer’s note indicates that the piece was “made with the composer, the painter, and George Balanchine in heart and mind.” The painter in question is Carol Schille who is credited with the projection art. While “Kinderszenen” seemed very balletic, that is really all I can remember of it other than the music by composer Allen Shawn, performed by pianist Yoshiko Sato, which seemed more in jarring juxtaposition to the timing and fluidity of the choreography than informed by or in dialogue with it. Regardless, I felt unengaged, and I desperately wanted to be engaged.

The subsequent work, “In the Garden of Souls (Revisited),” was actually the piece that resonated the most with me long after I left the theater. It includes very evocative, primal gestures. The dancers, clad in bright red leotards with diamond cut-out shapes exposing their strong bodies, perform to music that includes vocals and percussion which are supposed to be an emblematic blend of “native traditions” of North America and “ancient traditions” of India and the Far East. It is a weirdly exoticized piece that didn’t entirely offend or fail to captivate. Along with the two company premieres that followed, “Dreams” and “Urban Study-Excerpts,” “In the Garden of Souls” was provocative enough to make me sit up and take notice.

“Dreams,” is performed by three female company members costumed in pearlescent short dresses dancing like broken, almost lifeless dolls synchronized and propelling off of their contact with each other. “Urban Study,” in contrast, is more of an ensemble piece, and, true to its title, gives a gritty, industrialized factory feel as the dancers strike strong attitudes and strut or defy with their tough demeanor.

The dancers’ commitment and energy throughout each of the final three works made me happy to give them their much-deserved applause, and the choreography and concept of those pieces left an indelibly vague remembrance that I had seen some interesting work.