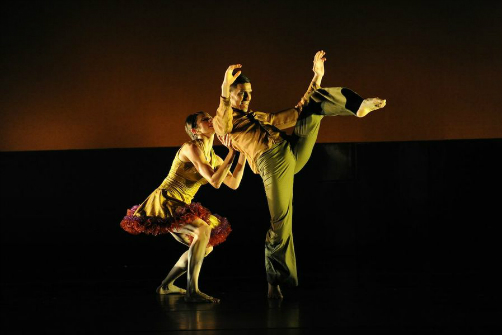 NYC-based dance company Ballet Hispanico's mission for the last 43 years has been to exemplify and celebrate Latino culture. What better way than starting with great music? Ranging from Catalonian folk music to Celia Cruz to club beats, the range of music gives this show some historical perspective. And for the first time that I can remember, there was music playing in the house before the show started.

All of the dances performed were made in the last four years with the exception of Nacho Duato’s stunning first work, Jardi Tancat, made in 1983. In this piece, the dancers portray farmers in an “enclosed garden” waiting for rain and planting seeds in Duato’s larger-than-life fashion. Catalonian folk songs by Maria del Mar Bonet set the stage for three couples to complete complicated and yearning duets. The partnering was extremely quick and technical and the dancers showed their anatomical organization and artistic prowess.

The second piece on the program, Annabelle Lopez Ochoa’s Sombrerisimo was made for 2013’s Fall for Dance Festival. This slinky and masculine dance for six men is meant to reflect the surreal paintings of Magritte. The men in button-ups and pinstripe pants exchange and toss bowler’s hats, but there is more to Magritte and the dance than this. The salsa moves paired with athletic handstands and leaps through the air made for a display of machismo balanced with a few moments of slapstick. The music by Banda Ionica allowed for a playful and quirky musicality.

The show ended with artistic director Eduardo Vilaro’s Asuka, his first full company piece for the company. This celebration of Celia Cruz’s music that traveled from Cruz’s music, to radio clips, to club music begins with an intense and captivating solo by Jessica Wyatt who portrays Celia Cruz. The rest of the group waits in a line, seemingly to get into a concert, while we catch the Cruz, the Queen of Salsa, in a personal moment. Then, the party starts. The women clad in flamboyant tutus and the men in fiery colors transformed the stage with their vibrant energy. A playful and youthful duet and another love crazed duet feature high legs and seamless partnering. The dancers get interrupted by an old radio clip that could have been informative to a not so knowing audience about Cuba. The sound of some of the radio clips were covered with white noise which may have been intentional, but the applause sounded like rain at one point, which was out of character in this polished performance. The last duet between Wyatt as Celia Cruz and Alexander Duval to Guantanamera took the show to it’s highest point yet. Wyatt lit up dancing with her partner as if possessed by love. The joy of live performance and seeing someone swept up in it is what it’s all about. Eduardo Vilaro, the director for the last five years is keeping it contemporary, fun and meaningful.