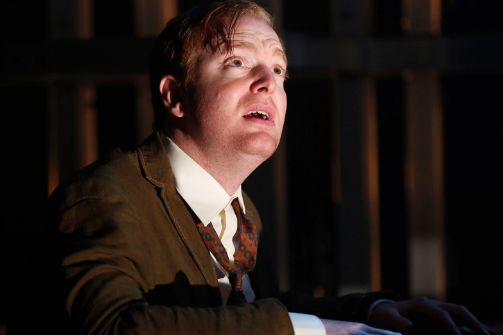 BOTTOM LINE: An entertaining, poignant, and brilliantly-written exploration of the moral dilemmas that arose among the scientists who developed the world’s first atomic bomb.

Hungarian-born physicist Leo Szilard (played with both arrogance and nagging self-doubt by the terrific Jeremy Kushnier) was a prescient man who understood that Adolph Hitler’s ascent would bode badly for the European Jewish community he was part of. As ill winds began to blow he and his wife, Dr. Trude Weiss Szilard (Sara Gettelfinger) fled to Britain where he quickly rocked the scientific world by developing a nuclear chain reaction.

Five years later, the couple moved to the United States but the relocation did little to quell Szilard’s fears and he began to worry that Nazi Germany might unleash an atomic bomb against its enemies. His panic led him to contact Albert Einstein, his former teacher; in desperation, Szilard asked Einstein to use his clout to push for federal funding to develop a nuclear reactor. As Szilard and Einstein saw it, this was the only way to deter Hitler -- countering force with force.

The result was The Manhattan Project and while I concede that it sounds like a bizarre subject for musical theater, rest assured that it works. In fact, Atomic is beautiful, evocative, passionate, and moving. It’s also extremely entertaining, with bursts of humor, well-crafted dialogue, and catchy song-and-dance numbers.

Over the course of two fast-moving acts, we witness Leo and Trude struggle over familial priorities; meet the womanizing Enrico Fermi (a leering Jonathan Hammond); watch bureaucrat Arthur Compton (well played by David Abeles) juggle the needs of Project scientists with the needs of their military employers; and see Rosie the Riveter (a threesome played by Alexis Fishman, Sara Gettelfinger, and Grace Stockdale) work an assembly line. The fact that the women had been told nothing about the devices they spent each day creating is jarring, especially when it is revealed -- in a song performed in a style reminiscent of the Andrews Sisters -- that they’d been instructed to tell anyone who asked that they were “making holes in the donuts, lights for the lightening bugs." It’s clearly campy, adding to Atomic’s whimsy and charm.

That said, there is nothing whimsical, campy, or charming about the atomic bomb and as the reality that the device might actually be detonated became clear to Szilard, he organized 100 of the country’s top scientists to petition President Harry Truman, begging him not to drop it on innocent people. ”Our greatest casualty, our own humanity,” he laments.

Szilard’s colleague, J. Robert Oppenheimer (a chain-smoking Euan Morton) pooh-pooh’s Szilard’s effort, and argues that it is naïve to think that the US will forego using a projectile that was years in the making and that cost millions to produce. “We knew that someone was going to use it and we wanted that someone to be us,” he shrugs. What’s more, he continues, by utilizing the bomb “we have the opportunity not just to end this war, but all wars, not with bullets, but with science.”

Szilard is not convinced and is racked with guilt over the inevitable destruction and loss of life that the Project will unleash. Indeed, in the aftermath of the attacks on Hiroshima and Nagasaki -- shown in shadow with fluorescent lights flashing and smoke and mist filling the theatre’s air -- his plaintive cry is heartbreaking: “ How do you say, ‘I’m sorry’ to the whole world?” he asks.

It’s obviously a question without an answer.

The highly charged explosion of the reimaged bombing is enhanced by the incredible lighting design by David Finn, the unsettling special effects by Gregory Meeh, and the choreography by Greg Graham. In addition, a simple but enormous industrial-looking set hovers over the actors. Combined with excellent staging by director Damien Gray, the end result is a show that challenges conventional wisdom about war, peace, and the US role in world affairs.

The fact that Szilard and his colleagues seemed to genuinely believe that the existence of a nuclear bomb would ensure international peace is a shocking revelation. We now know that activist A. J. Muste [1885-1967] was right and the scientists wrong. As Muste argued, “There is no way to peace. Peace is the way.”

(Atomic plays at the Acorn Theatre at Theatre Row, 410 West 42nd Street, through August 16, 2014. Performances are Tuesdays through Thursdays at 7PM; Fridays at 8PM; Saturdays at 2PM and 8PM; and Sundays at 3PM and 7PM. Tickets are $69.25 and can be purchased at telecharge.com or by calling 212-239-6200. More show information is available at atomicthemusical.com.)