By Sharr White; Directed by Bart DeLorenzo
Produced by The New Group 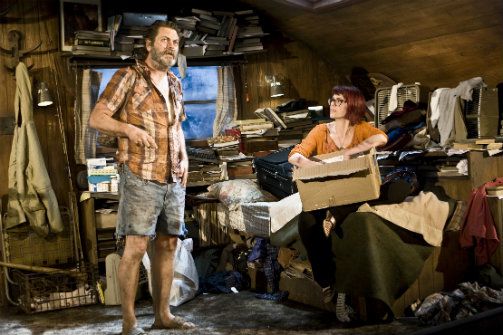 BOTTOM LINE: An absorbing two character drama about the hold past loves can have, especially the all-consuming and damaging ones.

This latest production from the New Group comes with a storied pedigree: artistic director Scott Elliott and the company are Tony Award-winners; playwright Sharr White and the show were finalists for the Steinberg/ATCA New Play Award; set designer Thomas Walsh won an Ovation Award for the set design (for the play’s run at the Odyssey Theatre in LA); Megan Mullally has won multiple Emmy Awards and the show comes with the added frisson and curiosity factor of a real-life married showbiz couple playing the exes whose severely fractured relationship is at the heart of the show.

Nick Offerman, dressed only in an apron that displays his naked backside to the audience, makes a very memorable entrance as Ulysses. At the sight of his ex-wife Emma (Mullally), who has just turned up at his Colorado trailer, he exclaims "Holy crap!" He’s stunned to see her since they have not laid eyes on each other since she took off with their young son in the middle of the night 20 years earlier. We learn that Emma, carrying $17K in cash, has up and left her second husband on the East Coast and come to find Ulysses after their son hired a private investigator to locate him. He discovered that Ulysses, who has an oxygen tank in a knapsack on his back and a giant patched up wound on his chest, is dying of lung cancer.

Though he yells at her to get out, she ignores him and brings her bags into the trailer. Their fighting continues but something more than a glimmer of affection beneath the long-simmering anger and sadness is apparent. She tells him, sounding bewildered and frustrated, “I’ve hated you for so long. But the second I heard about everything I just packed my bags!”

As they go back and forth, layers of their past and how they feel now become clearer. He’d been a published poet with a teaching job but also an alcoholic with an increasingly troubling drinking problem. Emma had been devoted to him. “It was like a two person cult,” she remarks. She’d once told him she loved him so much it made her tongue hurt. Emma eventually remarried -- another poet and professor -- but one who could never measure up to what she was holding onto, and always knew it. Ulysses tells her, “I’ve had girlfriends, even a fiancé walk out on me. But no one left me like you did.” And then there’s the mysterious incident that transpired on that fateful night 20 years ago, with moments of revelations that build and recede throughout the show until the final emotional explosion. It’s arguably a tease to draw out the denouement, but the surge and retreat of the interplay seems in keeping with the characters. And audiences would otherwise be denied some of White’s choice snap and bite he’s put in the arsenals of these two locked in verbal combat.

Mullally or Offerman are known for roles in comedic television programs (Will & Grace, and Parks and Recreation, respectively), yet Mullally turns in a solid, dramatic performance and is completely believable as the confused, raging, and yet still adoring former partner. But it’s Offerman, normally a very commanding physical presence, who really stands out as he inhabits the hurt, wheezing cowboy who desperately wanted just one drawing or report card from his son, and can no longer put his ratty shirt on by himself.

In addition to the acting, the award-winning set design should also be noted. Impressively, Walsh is able to simulate a working shower with steam coming out and a functioning kitchen sink as well. But the trailer, a recluse’s treasure trove, is something to behold, with books strewn about, an old typewriter at an angle on top of a pile, and various jars and knickknacks on the kitchen shelves.

The writing and acting had me completely engaged for the short 90-minute run time. Ulysses and Emma were definitely a pair I would have enjoyed spending more time with and seeing how they evolved post-reunion.

(Annapurna plays at the Acorn Theatre at Theatre Row, 410 West 42nd Street, through June 1, 2014. Performances are Tuesdays at 7PM; Wednesdays at 2PM and 7PM; Thursdays and Fridays at 8PM; Saturdays at 2PM and 8PM; and Sundays at 2PM. Tickets are $75 and are available at telecharge.com or call 212-239-6200. For more show info visit thenewgroup.org.)