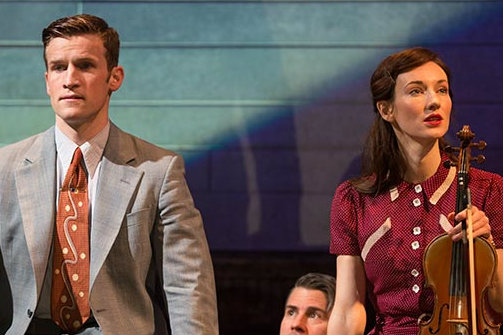 Claybourne Elder and Elizabeth A. Davis in Allegro. Photo by Matthew Murphy.

BOTTOM LINE: Allegro, the hidden gem of the Rodgers & Hammerstein library, gets an overdue revival that is overdone.

Ah, Allegro, that lovable bastard child of the illustrious Rodgers & Hammerstein duo. Although this work was never revered like its notable sister-musicals, Oklahoma!, Carousel, South Pacific, or The King & I, Allegro has tantalized musical theatre buffs and historians since the original 1947 production. The number of people who know Allegro intimately may be few, but for that small subset of musical theatre aficionados, it may be the most widely debated show in the R&H catalogue. Often considered the first “concept musical,” Allegro has even been credited as a major influence in the writing of Stephen Sondheim. With such a juicy back-story, a major revival of this diamond in the rough seems overdue.

The stars finally appeared to be aligning for this troubled musical. Classic Stage Company hypnotized audiences with their first-ever musical last season (an exceptional revival of Passion), John Doyle was slated to direct again, and then a stellar cast was announced, making this a highly anticipated revival for the fall theatre season. In the title song, Hammerstein pens the lyrics “brisk, lively, merry, and bright - allegro.” Unfortunately, those adjectives could never be used to describe this laden and insufferably pretentious production.

Allegro is a musical parable, simple in story and moral in tone. It tells a tale of Joseph Taylor Jr., an “everyman” who is born the son of a country doctor. There is nothing particularly extraordinary about Joe. He is a good and intelligent person, but his life is certainly within the realm of the ordinary. He experiences the death of his grandmother, finds young love, feels pressured to work in the family business (medicine), attends college, gets married, and settles into his career. Hammerstein wrote this show after becoming highly successful, and being asked to join numerous boards and committees that prevented him from doing what he actually loved - writing. Inspired by these events, Hammerstein (rather beautifully) depicts Joe as he moves from the country to Chicago, where his career as a doctor becomes more about hospital politics and cocktail hours, and less about his patients. Ultimately Joe steps down from his prestigious post in the Chicago hospital and exclaims “I want to practice medicine again, among people I understand.....I’m going home.”

In Allegro, the ensemble frequently voices Joe’s subconscious; originally the story was told largely through dance (choreographed by Agnes De Mille), relying on this vocabulary of movement as a mode of storytelling. For fear of being deemed a “musical theatre purist” it is probably best that I stop talking about the 1947 Allegro and focus hereafter on the Allegro of 2014. Mr. Doyle’s production trims the show down to 90 minutes and scraps nearly every step of choreography. The truncated book tells the story with efficiency, and the lack of dance in the show is perfectly acceptable (even though a pirouette or two might add some much needed levity). Regrettably, it is Doyle’s direction that turns this delicate musical into a joyless dirge. Even in the abstract, Allegro would seem to work with the standard Doyle conceit of actors playing instruments - it is after all a concept musical - but the time has come to dismount that one-trick-pony and tell the actors to leave their violins, banjos, and cellos at home.

Admittedly, I have been on the fence more than once when it comes to Mr. Doyle. I suspect the instruments will be a point of contention for many critics; I too have been all over the map, loving Doyle's Company, being disappointed in Sweeney, and somewhere in the middle with Merrily. However, the actors' instruments are not the only part of this production that breeds confusion and frustration: let’s not forget that thumping heart sound effect, Joe periodically stepping off the stage, that shaft of light that Joe symbolically presses himself up against again and again, and the fact that actors deliver 95% of their lines to the audience. There is so much directorial trickery at hand, and it is all used to pull the wool over our eyes.

Despite the irksome direction, the lead actors fare rather nicely. Claybourne Elder gracefully holds the show’s center as Joseph Taylor Jr., making him a subtle and winning protagonist to latch onto. Elizabeth A. Davis is especially magnetic, finding all the shades of humanity in the show’s most selfish and unlikable character, Jenny Brinker, Joe’s maneuvering wife. Jane Pfitsch is a wonderfully sardonic Emily, singing the show’s most iconic number “The Gentleman Is A Dope;” and we are blessed with the warmth of performers like Malcolm Gets and Alma Cuervo as Joe’s father and grandmother.

Allegro is still a wonderful musical, and hopefully some day it will have its due. Unfortunately, this production has absorbed too much cynicism from the big city, and has neglected nearly all of the homey charm. Like many allegories, folk tales, and parables, Allegro is designed to deliver a hopeful message that uplifts and inspires goodwill to the people. But with such heavy-handed direction, all this production inspires is the desire to cry out to the townsfolk, “the emperor has no clothes!”