Words, Razors, and the Wounded Heart 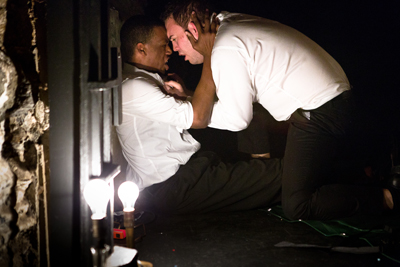 Dean Acree and Ben Diserens in WORDS, RAZORS, AND THE WOUNDED HEART. Photo by Hunter Canning.

BOTTOM LINE: Its controversial themes will make you gasp, but the well placed humor will keep you laughing.

What changes us? Is it our environment, family, relationships? What if that environment is strewn with drugs and those relationships we cultivate are forbidden? Words, Razors, and the Wounded Heart, which borrows its title from Shakespeare’s Titus Andronicus, takes us into the yippy world of Greenport, Connecticut as a modern version of a Jacobean revenge tragedy takes place before our eyes. Do not let its genre fool you though; there are plenty of lines which spark roars of laughter from the audience.

Beginning the storyline in Colorado we are introduced to Ryan (RJ Vaillancourt) and Jenni (Amanda Brooklyn). After a phone call from Connecticut the pair decide to travel back to Ryan’s hometown to visit his sickly mother who has cancer, and confused brother, who is contemplating eloping with his girlfriend. It turns out a lot more is happening at home than Ryan is aware of. While getting the lowdown on what he has missed while across the country, we observe all of the locals confiding in their friends, and letting the audience in on all of their dirty little secrets. The town cool kid Danny Everett (played by the captivating Ben Diserens), turns out to be carrying on multiple relationships without the knowledge of his girlfriend Ashley (Emma March Barash). What Danny does not know is that Ashley is carrying on an incestuous relationship with her brother Joseph (Sean Patrick Monahan). Eventually everyone’s secrets are heard by the wrong ears, causing confusion, chaos, and even death.

The production team for this show excels at their work. Director Jake Ahlquist utilizes the small space well. His scene transitions occur simultaneously with the ends of the previous scenes. Though that choice makes it difficult to hear some lines, it was probably the smartest decision to keep the show at its run time of two and a half hours. With a very simplistic set, designer Grace Laubacher still emits a distinct point of view from the tarp splattered with red paint to netting hanging from the ceiling and a strange light fixture.

One aspect that needs mention is the fight choreography, to which I applaud choreographer Cory Asinofsky. Dean Acree, who plays drug dealer Aaron Moore, is involved in quite a bit of the stage combat and has incredibly crisp and believable movements. I was frozen in my seat with unblinking eyes, as many in the audience were, while we watched Acree's work. Unfortunately others in the cast did not seem to be as adept to the combat, though they did execute Asinofsky’s wonderful combinations safely.

Throughout the show the cast plays off each other well maintains an invigorating energy. The characters are people who are written so realistically they could very well exist in our world today, using profanity, violence, sexual suggestion, racial slurs, and drug use in many scenes. Some people might be uncomfortable with these themes, but they seem to be placed well in Words, Razors and the Wounded Heart for both shock factor and comedy. These actors are obviously very familiar with comedic timing. Alongside the humor there is so much truth that is spoken in the dialogue, such as Joseph’s line to Jenni which reverberates in my mind to sum up the interactions of all of the characters: “You haven’t noticed that it’s hell yet?”

(Words, Razors, and the Wounded Heart plays at UNDER St. Marks, 94 St. Marks Place, through April 27, 2013. Performances are Tuesdays through Saturdays at 7PM. Tickets are $18 -- $15 for students and seniors -- and can be purchased at horseTRADE.info or by calling Smarttix at 212-868-4444. For more show info visit lessthanrent.org and horseTRADE.info.