By Ethan Coen; Directed by David Cromer
Produced by The Atlantic Theater Company 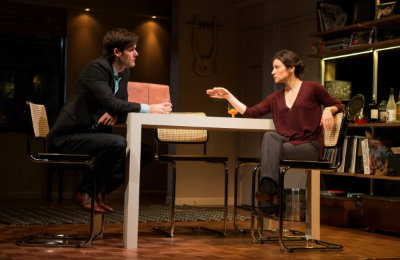 Robert Beitzel and Susan Pourfar in Ethan Coen's WOMEN OR NOTHING. Photo by Kevin Thomas Garcia.

Atlantic Theater Company’s production of Ethan Coen’s new play, Women or Nothing, is nothing short of genius. This play is so smart and intricately written it ought to be held up as a prime example of how to write for the theatre. With jokes intertwining around themselves in a unique and ultra realistic way, the piece takes its time winding through a myriad of conversations. Boldly breaking the “Show don’t tell rule” of drama, very little actually happens in the play and yet there is not a second that isn’t fascinating.

Women or Nothing tells the story of Gretchen (Halley Feiffer) and Laura (Susan Pourfar), two middle aged lesbians who are ready to have a baby. Gretchen refuses to use a sperm bank while Laura insists it’s the only option. But because Gretchen is unable to get pregnant it takes a lot of convincing to get Laura to go along with her alternative plan – inviting her friendly co-worker over and getting Laura to work her “magic” to obtain their much needed sperm donation. Laura however is a “gold star lesbian,” which means she’s never slept with a man before and finds the thought of it completely unimaginable.

Enter Chuck (Robert Beitzel), who is completely oblivious to Gretchen and Laura’s intentions. The set up for Laura and Chuck’s night getting to know each other is marvelous and the pay off is just as great. As Laura awkwardly tries to gear up for her attempted seduction Chuck finds himself naturally attracted to her unintentional charms. The two discuss an assortment of topics, from Chuck’s opinions on what it takes to be a good lawyer, and subsequently, human being, to Laura’s questioning of her career as a concert pianist – why would they pay her so much money to fly her to Cleveland to play a piece when there are “at least a couple of people [in Cleveland] who could play it competently.” Coen uses his characters as vehicles for a range of subject matters and each issue is covered with intelligent insights and humor – all the while the tension and subtext of Laura’s mission hangs heavily over her.

I won’t say how Chuck and Laura’s evening turns out, but I would be remiss not to mention the arrival of Laura’s mother the next day. Dorene (Deborah Rush) brings an indelible likeableness to what otherwise would come off as a prudish, albeit highly sexually active, mother character. All the acting in the piece is top notch. It’s not easy to perform a play with so much heady discussion but the actors keep the text alive. The directing by David Cromer is basic and to the point – a lot of stillness and seated conversations that help to highlight the text even more. The set design by Michele Spadaro is fantastically realistic with such a high attention to detail you’d think she had taken an actual New York City apartment and placed it on stage.

Women or Nothing is a beautiful, deep look at four people’s lives, asking questions on why we are the way we are and philosophizing possible solutions. It’s a real look at parenthood as well, past, present, and future. Ethan Coen is already well known for his superb writing in film, but with this production he proves his worth as a playwright. If you’re a fan of the Coen Brothers’ films, especially their more slow-burning, thought-provoking pieces like A Serious Man, then you will love Women or Nothing. The play is impressive in its scope and content all while staying within a single space and only using four characters. It is truly a work of talent and intellect.

(Women or Nothing plays at the Atlantic Theater's Linda Gross Theater, 336 West 20th Street, through October 13, 2013. Performances are Tuesdays at 7PM, Wednesdays through Fridays at 8PM, Saturdays at 2PM and 8PM, and Sundays at 3PM. There are also Wednesday matinees on September 18 and 25, and October 9, all at 2PM. There is no show Tuesday September 17. Tickets are $65 and are available at atlantictheater.org or by calling 866-811-4111.)