Witnessed By the World

By Ronnie Cohen and Jane Beale; Directed by Karen Carpenter 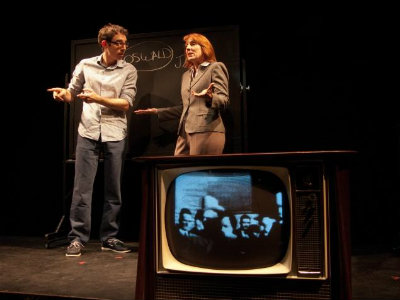 Max Gordon Moore and Charlotte Maier in WITNESSED BY THE WORLD.

BOTTOM LINE: A timely thriller with the intent to entertain rather than commemorate.

Along with the 50th anniversary of the 1963 assassination of President John F. Kennedy comes a slew of television specials, commemorative magazines and here in New York...theater. These productions include Regular Singing at the Public and The Day Before at Symphony Space. Another to add to the list is less a remembrance of the man or the infamous day, but a contemporary Da Vinci Code-style conspiracy theory play in Ronnie Cohen and Jane Beale’s New York premiere of Witnessed By the World. The theories around the assassination of JFK have become nearly as much a part of the American fabric as the actual event. Witnessed, snappily directed by Karen Carpenter, takes place not in 1963 but 2013. It focuses not so much on the assassination of the president, but on the theories of ties to the mafia.

Who killed JFK has been done. In this play, young commercial screenwriter Ira (Max Gordon Moore) wants to avoid “covering old territory” by steering away from well-tread popular culture like Oliver Stone’s film. Lucky for him he becomes entangled with journalist Joan Ross (Charlotte Maier) who has a lifelong fascination with the event, specifically with Jack Ruby, the man who killed Lee Harvey Oswald. Ira has a Hollywood producer brother cheekily named George (last name Basil not Gershwin). After some flops he and George decide to stick to a proven film genre by making a mob movie. Joan’s theory of Jack Ruby’s connection to the mafia is exactly the untold mob story Ira is looking for. For differing personal ambitions, they agree to team up and write the screenplay.

Playwrights Cohen and Beale are themselves screenwriters, which may account for some of the truncated vignettes, quips, and button-ending scenes. Anytime a scene ends with the line “…if it’s the last thing I do!” it begins to enter “zinger” territory for me. Luckily they have thrown in enough intriguing facts about Jack Ruby that if you’re not well read on the subject you may be inspired to study up. However I always ask the question of any play: does this need to be theatre, or would it actually be served better as a film? More times than not I found Witnessed to fall into the latter. One reason is that the story would come alive with highly realistic texture and context. Without this, the bones of the plot are laid bare in a dialogue-centric style of storytelling.

Carpenter’s direction decides to go with the cinematic flow by pulsing through the scenes and transitions, which are full of "news report" music and heavy drumming in Lindsay Jones’ sound design. Libby Stadstad’s set design is economic and functional. The scenery really comes to life though with Matthew Haber’s projection design; I only wish there were a way for his projections to live on stage longer than the transitions between scenes.

Cohen and Beale do use facts, theories, and research to throw together a world where all of it can become something more immediate than history. While the meeting of Joan and Ira is contrived, their relationship allows for secrets to be unveiled for an audience not as familiar with the theories. Ira is drawn as a young daft writer unfamiliar with words like “the Warren Commission.” While I hope our American history curricula are not failing this much, Ira's ignorance at least helps in creating a space to spell everything out – literally on a chalkboard center stage.

One of the greatest joys of the evening is the performance by veteran actor Lois Markle as Eileen Kaminsky, Jack Ruby’s sister. She brings a welcome pause and humanity to the plot-driven journey. Cohen and Beale have written some of their most human and unrushed scenes between Eileen and Joan. Bob Ari is also excellent as a mostly utilitarian character who is close friends with Joan and also in trouble with the contemporary mafia. Joe Tapper is appropriately slippery and intimidating as mob member Joe Capano.

Cohen and Beale succeed in giving a look at what a child deeply affected by the JFK assassination might be up to now. Maier is mentally acrobatic at connecting the dots on stage. However, her character is more a conduit of research than a sympathetic hero. More times than not she echoes The X-Files character Scully in her relentless truth hunting. In the end we learn a good deal about Jack Ruby and not so much about our protagonist Joan Ross.

The story of why the world is still shaken by the assassination of JFK is maybe what the young Ira Basils of the world need more. Joan touches upon it early in the play demanding an understanding from Ira of the scope of the horrific event, comparing it to 9/11: “The country went from Camelot to crap in the blink of an eye. Jack, Bobby, Martin Luther King…those guys were out to change the world!” After 50 years I wonder if all of the conspiracy theories are still as vital for future generations to grasp as this context of how our country was knocked off kilter in a very lasting way.