To purchase tickets at visit terranovacollective.org 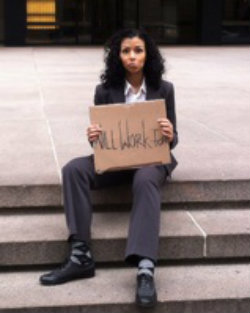 Dacyl Acevedo in WILL WORK FOR. Photo by Heather Anderson

Will Work For is a tightly written and energetically performed solo show being showcased as part of the soloNOVA Arts Festival, presented by the terraNOVA Collective. Writer/Performer Dacyl Acevedo gives an animated and engaging performance. Despite the well-timed comedic moments of the show the piece’s humor simultaneously stings of an honesty that is clearly close to home. Acevedo plays herself, or at least a version of herself, on a journey through multiple scenarios all with the hope that eventually she will land on top. But like the “Sad Clown” character she portrays at various points throughout the show, we see Acevedo balancing her humor and ability to laugh at herself with a sense of dark foreboding that perhaps her hope for work will never be fulfilled. There are many moments in Will Work For in which Acevedo explores this irony in a comical way and yet she has no reservations about confronting the dark side of that irony as well.

As the show opens, a projector, which displays photos of various unemployed men and women during the preshow, presents silent movie type text that accompanies Acevedo as she appears as the aforementioned Charlie Chaplan-esque “Sad Clown” character. It’s really a brilliant move by director Jo Cattell and Acevedo because the comparison between today’s current unemployment state to that of the depression era is evident. Will Work For’s use of this trope is intelligent and the metaphor is not lost.

Acevedo fearlessly relives numerous experiences during her time seeking employment in what I can only assume is a relatively autobiographical piece. From an interview in which she plays a helpful employment agent who advises her that if she wants to get work she needs to tell people she quit the acting business and is seeking something more stable, to a hilarious reenactment of waiting to speak with someone in an welfare office, Acevedo constructs a series of scenes that feel hyper-realistic and yet at the same time slide smoothly into farce. It is comedic irony in it’s best form.

Acevedo peppers personal stories about her mother and father throughout the piece as well, heightening the empathy we feel for her character. She takes the statistics that are all over the news and turns them into real people, specifically in a scene where she rattles off a roll call list of characters and what sort of work they are looking for, with adeptness and ease. Acevedo is truly a talented performer.

Another profound moment in the piece occurs when Acevedo shares a story of her hardworking mother sewing in a factory to provide for her children which is then followed by clip of Newt Gingrich speaking about children from impoverished neighborhoods and how they lack good examples of hard work and are therefore likely to be lazy and use any money they make for drugs. The absurdity of his statement is called out in a smartly subtle way that lands the point against Gringrich’s statement stronger than any political counterargument could. It is in this way that Will Work For calls into question the way in which we treat and talk about the unemployed in this country. Acevedo makes it personal and does so with a strength and sense of humor that makes her story one worth hearing.

(Will Work For plays atthe IRT Theater, 154 Christopher St. buzzer 3B, New York, NY 10014. Presented by the terraNOVA collective as part of the 10th Annual soloNOVA Arts Festival, May 22 through June 11, 2013. Tickets are $20. Purchase tickets at the door or online at terranovacollective.org.)