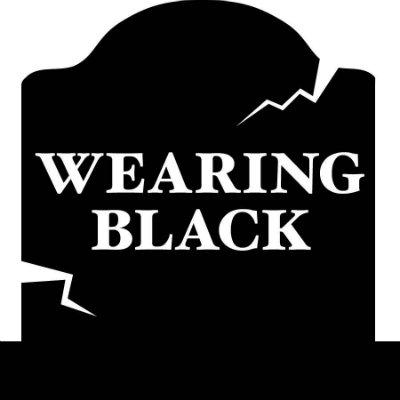 BOTTOM LINE: This sampling from an overly dramatic musical is, in the end, quite compelling.

The musical genre is often used to depict cheery sentiments and humorous moments. In Wearing Black, however, the traditional musical style is used to convey darker events and issues: drug addiction, a deadly car crash, physical assault, a funeral, and a drug overdose. In this play very few lines are spoken, even short conversations are sung, which is an interesting choice stylistically but sometimes makes events unclear. The play opens with two friends and bandmates Evan (Daniel Tepper) and Nate (BJ Gruber) happily jamming away with Nate’s girlfriend Alyssa (Miranda Whaley). The happy moment shatters when Kristin (Erin Maya) enters the room, spouting out her somber news in song. The use of song for such a terrible event seems almost humorous as we piece together from the lyrics that Charlie, Evan’s twin and Kristin’s boyfriend, was driving while high and died in a car crash. The four attempt to piece their lives back together with the loss of Charlie. Kristin must also face the debts Charlie left behind when a drug dealer physically and sexually assaults her.

The problem I have with many musicals was evident in Wearing Black: the play seems thin on character development at some points, and some characters seem complex while others seem one-dimensional. While some characters seem doomed from the start (Kristin) others seem overly sunny and flawless (Nate and Alyssa). Certain tragic details, including Kristin being raped and the deaths of all the passengers in the car that Charlie hit, seem to be simply brushed over. This might be due to the fact that this production is a condensed version of a longer, two-act work. The drama in this work is extreme, with it sometimes feeling like a soap opera put to music.

Nevertheless, I found myself completely riveted by the production’s end. I wanted to see how the events play out for these characters, especially Kristin, who seems to fall victim to tragic event after tragic event. This might be due in part to the obvious talent of the actors who are able to make the play’s many dramatic turns seem believable and also skillfully express emotion through song. Considering the fact that Evan and Nate are both in a rock band, it would seem more fitting to have a few rock flavored musical numbers, with perhaps one or both characters singing their woes along to a guitar. The play’s sole use of keyboard music seems to be a sharp contrast to the dark themes of the play. I hope to see the full length version of this play on a New York City stage soon so that I might quell my piqued curiosity.