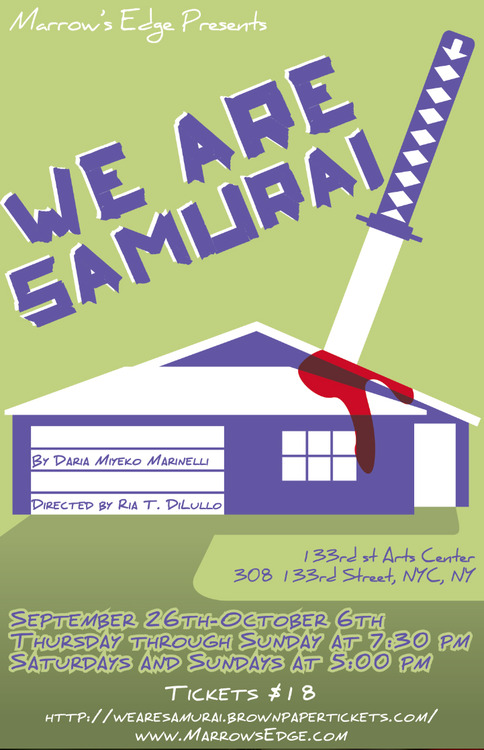 I had no clue what to expect upon entering the 133rd Street Arts Center, but after reading the Director’s Note in the program (“Go exploring! Get two feet away from the actor! Change your position so you can witness what you want to witness!”) I realized two things: 1) I better not get cozy in one position, and 2) I better make sure my brain is turned on.

Heed that advice, dear reader. Getting the most out of an event like We Are Samurai requires active listening and an open imagination.

Written by Daria Miyeko Marinelli, the show features a small cast of four who are assembled all together only at the start and end of the evening. The scenework taking place in between features one to three actors, in one of four rooms in the space. You the audience member are free to roam as you please: go where you want and when you want, no rules. You may even be asked to participate, but only in small ways (in one hilarious moment, an actress couldn’t reach an item in the kitchen so she asked for help).

The story involves a young woman named Josephine (Tess Avitabile) who has has discovered her two cats murdered by friends Regan (Rachel M. Lin) and Elias (Karen Eilbacher). Rocky (Sean Devare) is Regan’s brother who’s caught in the middle. This absurd plot serves as a device to explore how we use payback and power to get what we want, underscoring how we hurt one another to make ourselves feel better.

Samurai is beautifully directed by Ria T. DiLullo, who has a real propensity for fully utilizing space. Her actors fluently rearrange themselves in and out of mock kitchens, temples, yards and living rooms. The in-tuneness of these performers with one another (knowing exactly what’s going on not only in their own rooms, but in the other actors' rooms as well) is remarkable.

The actors are uniformly excellent. Eilbacher makes rich, specific choices as Elias the mystic. Devare’s skill in comedy shines as he tries desperately to finish a cell phone game amidst disruptions. Lin nails calm-and-collected, so much so that it’s wonderfully eerie that her Regan can cause damage in the other characters' lives. And Avitabile’s journey as Josephine was the one in which I was most invested. Delivering a colorful, funny, emotionally charged performance, Avitabile made it so I didn’t ever want to leave her character’s bizarre little kitchen.

Bizarre indeed is the whole experience. We Are Samurai is unconventional (and sometimes frustrating, as you stand in one room and wonder if you should be in the next one) but it is striking on many levels. The dedication of the cast and crew on this developmental piece is apparent through and through.

(We Are Samurai plays at 133rd Street Arts Center, 308 West 133rd Street, through October 6, 2013. Performances are Thursdays and Fridays at 7:30PM; Saturdays and Sundays at 5PM and 7:30PM. Tickets are $18. The audience size is limited to 35, so buying in advance is highly recommended. Tickets are available at brownpapertickets.com.)