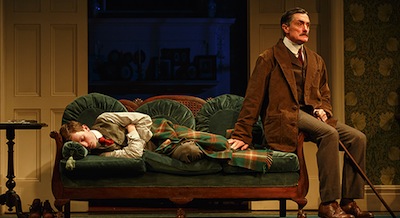 BOTTOM LINE: A golden boy returns home in the wake of a scandal at school and his family rallies to legally defend his name.

The Winslow Boy is one of those revitalized productions that give pause. Decidedly archaic conversations on integrity, advocacy, and finances don’t fall fallow in this revival because the Winslow family is just that, a family. In the parlor room of a Kensington house the Winslows are rocked by a visit from their “golden child” Ronnie who should be away at a military academy called Osborne. Thought to have forged a comrade’s postal money order, Ronnie is expelled and suspected of the crime. The Winslow legacy happens to sit squarely on Ronnie’s shoulders since his older brother Dickie is quite lazy at Oxford and his older sister Cate is a single suffragette. The pressure is only enhanced by the continual praise of his father, Arthur, who incites the ensuing trial even in the face of financial ruin. With the help of Sir Robert Morton, the lauded and stern advocate in Parliament, Cate and Arthur press for the court to proclaim Ronnie innocent and “Let right be done.”

The ambiguity of what’s “right” incessantly pervades this comedy-drama making a more mature audience audibly invested in the course of events. I was first taken in by the gorgeous set and lighting design. Peter McKintosh's sets and costumes and David Lander's lighting set the necessary framework for a sizably intricate experience. The warm glow of spring or the darkness of a January night melting into a June day made me unconsciously turn emotions. With Lindsay Posner’s direction it is easy to see The Winslow Boy is an Old Vic transfer, but then still alarmingly accessible for an American (and young) audience, proving some great risks happen by looking to our roots.

The script, by Terence Rattigan, hasn’t seen a Broadway theater since 1947 yet the dialogue—save a few colloquialisms—is easily transferable to our modern stage. I was beset by parallels to youth in crisis in America; the scads of stories we hear where the young are being hung. It was therefore refreshing to be in agreement and downright annoyed with Roger Rees’ zealous Arthur Winslow, a man who can no longer physicalize his prowess and so must hurriedly build a legacy in his children before time runs out. Rees’ Arthur has a persistently stubborn exterior, almost child-like, but in contrast there is his delectably conscious wife Grace. As Mary Elizabeth Mastrantonio plays her, Grace is a titular mother: devout, endorsing, even anarchical if it means protecting her brood.

And the brood: I wish to see Charlotte Parry in anything she does. Parry as Catherine Winslow is a modern, intelligent woman who is nonetheless still tied to dependence. Her stake in the trial, as a sort of co-counsel, gives us some of the best reminders of justice and integrity. Cate is for the people and we are for Charlotte Parry as Cate. Juxtaposed, with hilarious fashion, is the dim Jazz-loving “dreamer” Dickie, played by Zachary Booth. Dickie loathes Ronnie’s position in his father’s heart, a reality made only drearier when Dickie’s schooling is in jeopardy. Still, Booth’s portrayal is half clown, half victim; a unique playing of the oft forgotten middle spawn. To round off the Winslow children is our Ronnie, a role tailor-made for Spencer Davis Milford. Milford’s adolescence is bright and inspired, not mired or bemoaned as it would be in today’s take on the teenager. The lasting beauty of this character is Ronnie’s perplexing nonchalance. It's not so much he knows he’ll be acquitted as he knows he’s a child. We all have a belly laugh when he tells Sir Morton he was at the cinema during his verdict’s reading.

Comedy is a weird, but punctuated element in this production. Things that shouldn’t be funny are hilarious, yet the drama is not cast away. In this see-saw, the play remarks that reality encumbers both. The Winslow Boy understands this and exhibits it even in one-track characters like the calculated Sir Robert Morton played by Alessandro Nivola. Nivola’s Morton is wickedly funny and scary because he’s so right. Everything Sir Morton says or does gives us our desired result, but at the cost of our dignity, perhaps. Nivola’s Morton is a cobra, a bull, and maybe a lamb if we look hard enough. The cast, assisted by a sweet parlor maid, Violet (Henny Russell), a sweetly awkward family solicitor, Desmond Curry (Michael Cumpsty) and Cate’s conservative betrothed, John Watherstone (Chandler Williams), is wonderfully suited to toe the line between past and present. Though the play is four acts and spans two whole years, the story’s center can’t be lost because the production and cast are its fierce advocates. And that is the triumph of this piece: here’s a testament to true advocacy in a world of few examples. I walked out encouraged by a house in Kensington which I hoped, in the end, resembled my own.