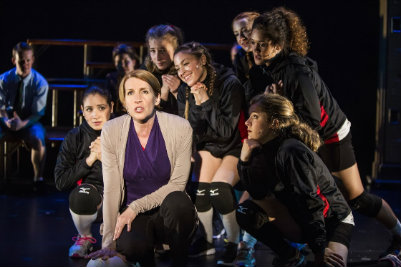 BOTTOM LINE: Glee and humor pervade is this catchy gem of a musical.

English lit teacher Kim Brindell (Susan Blackwell) has been ambushed. Content with her Shakespearean studies, her principal has suddenly thrust upon her a ragtag volleyball team that has, until now, been coached by the overbearing mother of the team captain. Brindell initially resists, tortured by an Olympic volleyball catastrophe that has haunted her for years, even prompting her to legally change her name. But as she begins to work with the increasingly-promising team, she rediscovers a past romance as well as a strength that she has kept locked up for far too long.

There are many elements in Volleygirls that combine to make it a sold-out, crowd favorite at New York Musical Theatre Festival. The writing team -- including a book by Rob Ackerman, lyrics by Sam Forman, and music by Eli Bolin -- has crafted a lovely, upbeat underdog story about redemption, forgiveness, and the strength we find from ourselves and our friends. Fueled by humor and heart, Volleygirls’ popularity at NYMF has even led to the scheduling of additional performances.

While the script is a gem, there are few surprises in Volleygirls, and you follow along with the blissful knowledge that while the show is very entertaining, it doesn’t strive to be anything deeper than what it is. However, it is elevated by the creative and surprising direction of Neil Patrick Stewart, who sets the tone with a very presentational staging style. The cast remains onstage for the majority of the play, and, when not in character, the cast members watch the action with the same glee as the audience; the keyword here is fun, and it is served from the cast both as character and spectator. During some moments, the team dons their hoodies and becomes a Greek chorus.

Ryan Kasprzak’s choreography adds to the joyous production. Particularly inventive are the actual volleyball matches. Choreographed to both the music and the action, the team combines rhythmic dancing and, of course, volleyball, to create thrilling and believable moments for the team.

As Brindell, Blackwell is a solid anchor for the show, though the script does not allow for as many of the lighthearted moments as it does the rest of the cast. Unfortunately, she spends the majority of the otherwise-uproarious show stuck in a self-doubting, defeated place.

The true joy of the show is the team, consisting of six characters who each have a compelling arc. Particularly memorable are Dana Steingold’s Stretch Mandelbaum, whose big attitude and over-familiarity with the teaching staff draws big laughs, and Julia Knitel’s Ingrid Hanson-Tuntland, the gentle giant of the team who must learn to shirk her meek side to find the beast within.

Volleygirls still has some work to do. Sure, there are a few musical numbers that go on a bit too long, a completely unnecessary character, and, again, predictability, but I don’t think you’ll hear many audience memebers at NYMF complaining as they exit, smiling and humming the catchy score. While this show may not be headed for anything revolutionary, I could see Volleygirls having a fun and successful off Broadway run, and I'll be excited to see it again.