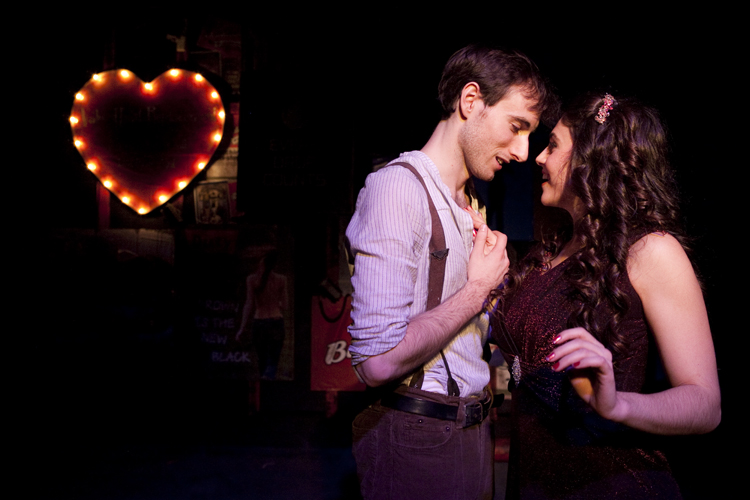 Will Sevedge and Brittney Santoro in URINETOWN.

BOTTOM LINE: Even when it's not funny, it's eminently enjoyable and oozes charm and good ol' fashioned musical decency from every pore. Well worth it.

The musical Urinetown (2002 Tony Award winner for Best Book and Best Score) opens on the poorer denizens of town, waiting in line to pay at Public Amenity #9, a pay toilet, and in song, we establish that there is a severe water shortage and water is restricted and controlled for the majority of citizenry; they have to pay for the priveledge to pee. Bobby Strong, the young man who works at the pay toilet as a janitor is unhappy with the system, and becomes even more so when his father is banished to the mythical, frightening Urinetown for the crime of peeing in the streets. He meets his foil/muse in Hope Cladwell, the daughter of the wealthy millionaire Cladwell P. Cladwell, the man who owns and operates all the pay toilets in town (under the auspices of Urine Good Company, wokka wokka). Hope, giddy and happy, teaches Bobby what it means to listen to his heart. Bobby, inspired both by her beauty and her words, stakes out Public Amenity #9 with the other poor people, peeing as they choose and without paying at all. This incenses the elder Cladwell, who takes off to teach these rascally upstarts a lesson. Obviously, wacky musical hijinks ensue.

As a critic and a person who eats, breathes and sleeps musicals in her working life and personal enjoyment, Urinetown is awesome. The show is equal parts meticulously crafted musical comedy and a send-off of that very genre. Writers Mark Hollmann and Greg Kotis embrace the form and eschew it all at once. The characters suffer from all the usual pastiche of musical storytelling, heavy-handed exposition, little depth of feeling or interest and simple motivations. But in the embracing of these faults, Hollmann and Kotis just slay whole phalanxes of joy. Well-played, gentlemen, well-played.

I could wax rhapsodic about the deeper themes of capitalism, government, the inevitable efficacies of power and influence, and the deconstruction of sociological training, but the fun of theatre is drawing your own conclusions. These are things, the deeper things, that I got from it whilst laughing my ass off. Whether or not you have an, ahem, deeper, experience with the show, or you just absorb the hilarious frosting, its great fun.

In The Secret Theatre's revival, the performances and direction (by Taryn Turney) are all sublime, although I'm not sure how many of the visual jokes are scripted. But this particular ensemble really understands the nature of the show, and each one of them has their own unique, distinct flavor. It's a superb ensemble, and I am very hard to please when it comes to ensembles. There were so many jokes happening in the background I sometimes found myself not paying attention to the leads and instead trying to catch all the background interaction. In another show with another director, I might find fault with that, but not here. Everywhere I looked, things were deliciously hilarious.

The leads (Will Sevedge as Bobby Strong, Brittney Santoro as Hope Cladwell, Jan-Peter Pedross as Cladwell, Lindsay Naas as Pennywise, Brandon Schraml as Officer Lockstock, and Macaela Sears as Little Sally) all do exceptional turns onstage, at all times both hammy and completely sincere. There were times I wished Will Sevedge was mic'ed, as he doesn't project as well as the rest of the cast, but that's literally the only nitpicking I can do.

Go see it. Urine for a real treat.

(Urinetown plays at The Secret Theatre, 4402 23rd St, Long Island City, NY, through January 26, 2013. Performances are Thursdays through Saturdays at 8PM; Sundays at 7PM; with an additional performance on Saturday, January 26th at 3pm. Tickets are $18 and are available at thesecrettheatre.com.)