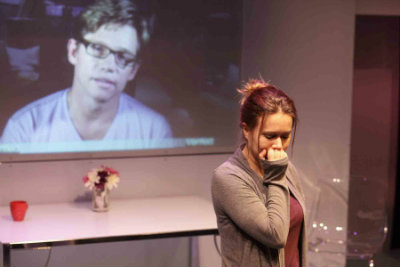 The best way for me to describe Two Point Oh would be to say that it is a mix between Arnold Schwarzenegger’s Total Recall and The Disney Channel's original movie Smart House with some Battlestar Gallactica references mixed in. That being said, Jeffrey Jackson wrote this show with a fresh take on technology and what rights we may or may not have regarding the creation of new beings. The movies referenced exposed us to preposterous situations when they were made, but if you analyze Jackson's script, the situation isn't so far-fetched based upon the level of technology that we have reached in the past few decades. Indeed, Jackson brings up issues that we will most likely be facing in the near future.

Jack Noseworthy plays Elliot Leeds, a billionaire software mogul who dies when his private jet goes down on his way to address the G8 Summit. His grieving wife Melanie Leeds (Karron Graves) is visited by Ben Robbins (James Ludwig), Elliot's under-appreciated partner and friend, but Ben initially seems to care more about business than her well-being. Ben's visit propels Melanie into an all-night cleaning binge, which culminates in the discovery of a package from what seems to be her late husband. Upon inserting the disk that was within the package into their smart house's mainframe computer, “work station Alpha,” a virtual simulation of Elliot begins interacting and taking over. The chaos that ensues includes a strange machine-human relationship which does not bode well with Ben as a result of his feelings for Melanie, his being kept in the dark about the technology created, and his insistence that the new “Elliot version 2.0” is simply a highly evolved app. Adding dimension to the story are the company's religious yet foulmouthed CEO Catherine Powell (Antoinette LaVecchia) and the cheesy news show host Jerry Gold (Michael Sean McGuinness). With each additional interaction all of the characters and the audience question whether or not Elliot is actually dead.

Each of these actors displays their craft excellently: Noseworthy acts through a two dimensional screen, but gave us no less of a dynamic performance than the actors who we are able to observe in the flesh. Graves' emotions tug on your heartstrings with a heart wrenching scene of grief. Ludwig has brilliant chemistry with Graves that gives excitement to this cerebral play. Humor is mixed in throughout the script for all the characters, but LaVecchia and McGuinness take the cake for best comedic scene.

The possibilities of the future of the human race are endless and Jackson exposes our minds to ideas that intrigue and surprise us. To accomplish this feat of futuristic technology the technical production aspects of Two Point Oh are incredible. The creative team engineered a way for Noseworthy to act and respond through a centrally located screen on the set, as we never see him in person throughout the show. In other scenes the opposite occurs, with McGuinness projected onto the back wall while we also watch him in person. Two Point Oh is breaking boundaries with mixed media!

Despite the quality of the show, my personal experience produced mixed emotions. Due to the entire back wall of the set lighting up to surround a main screen I found the technology straining on my eyes and brain. Yes, it is a wonderful show, but it is important to know that this particular theatre is small and your focus will repeatedly be focused on a screen. In addition I do admit that there were moments during the first half hour of the show that I was groaning at the thought of sitting there for the full run time of a bit over two hours, but upon completion of the performance I found that the intricacies of the plot do require that amount of time to play themselves out.

Two Point Oh sparks light into recesses of your mind that might not have been utilized in years. Director Michael Unger leads the team well and it was nice to see the creative crew and the cast were on the same wavelength as they joined together to create the world of the play. Even now, days later, my boyfriend is still talking about the show and quoting the script.