Off Off Broadway, Musical
Runs through 9.1.13
Theatre for the New City, 155 First Avenue 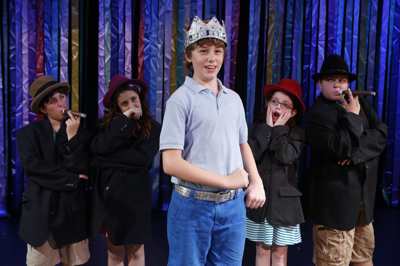 BOTTOM LINE: Prince Timmy lives blissfully in the fabled Kingdom of Hearts with his comic father, King Edward the Sensible, until a nefarious trio of kings ruthlessly kills the father in attempts to take over the kingdom. Now, the young king must learn to serve, rule, and war like an adult. Talk about growing pains!

Sandra Hochman and Jay Binder have teamed up with spectacular fission. When I entered the theatre I was already sure I had returned to my childhood. If the scads of little people with abetting parents weren’t enough, the set design was ethereally colorful with what looked like party streamers surrounding the black. Acting as partition and scrim, these streamers predicated the party that was about to take place.

Timmy the Great is a scrumptiously smart work engulfed in a rapturous score by Gary Kupper which includes classic and modern emblems of the American songbook. Kupper’s score is only enhanced by the enormously talented bunch of performers. I was equally inspired by the kids as I was the adults. Because the script called for the ages to reverse at one point, both were given greater range for action. Still, one actor which stayed true throughout was the mature Cormac Cullane as Timmy. Somewhere around “Protocol” and his duet with the fabulous Madame Minister (Lisha McKoy) in “Miracle of Words” did I find out Cullane was a true vocal star. His vibrato is primed to beat some of the best on Broadway. He’s certainly got growing to do, but for once that’s not a dig at young talents. The same can be said of his pint-sized comrades who speak authoritatively on revolution and Oscar Wilde. The young talents like Anna McCarthy and Zachary Brod are given some major meat in Hochman’s intelligent book. While it sometimes feels far-reaching, the book is imbued with equal amounts of play to distill the intelligence.

I was never disappointed by the camp from the kiddies or the hilarious trio of kings Tommy J. Dose, Ricky Altamirano, and Andy Schneeflock; just as impressive is the dancing duo Clyde Voce and Caley Crawford. Crawford makes her New York debut in this production. McKoy’s high strung Minister is pleasantly foiled by Jason Pintar’s vaudevillian Edward the Sensible.

Each number gives the group places to shine, but I’d say the ensemble numbers really give you Goosebumps. Take the first act finale, “Alone” where Timmy listlessly sings about his dead father. Though it was distressing at first to close a children’s first act with such heartbreak, “Alone” elevated the piece dramatically. When Timmy stands center stage surrounded by his invisible subjects’ voices the poetry of the play is cemented. I am so grateful Hochman does not condescend to her audience or her cast; instead the piece is saved by the simultaneous perspective from a child and an adult. What lingers about this piece is the joy of the theater and the sense grownup and child still develop in extraordinary ways.